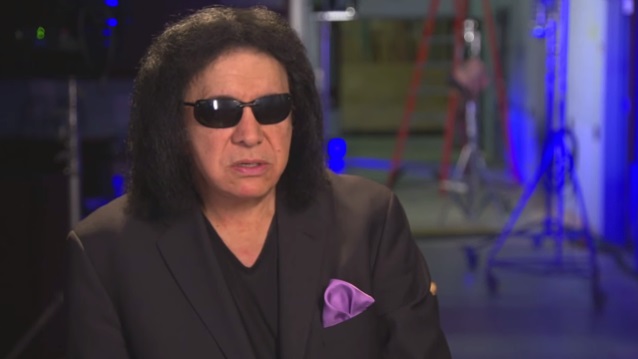 GENE SIMMONS Gets Called Out By N.W.A. During ROCK HALL Induction Speech

During N.W.A.'s induction into the Rock And Roll Hall Of Fame class of 2016, MC Ren addressed Gene Simmons' comments about how the KISS bassist/vocalist is "looking forward to the death of rap."

"I want to say to Mr. Gene Simmons that hip-hop is here forever," Ren said at the 31st annual Rock And Roll Hall Of Fame induction ceremony at Brooklyn, New York's Barclays Center. "We're supposed to be here."

According to Billboard.com, Ren's N.W.A. bandmate Ice Cube explained why N.W.A. and hip-hop in general belong in the Rock Hall alongside THE BEATLES, Elvis Presley and Chuck Berry.

During a chat with Rolling Stone to commemorate the 40th anniversary of KISS's groundbreaking 1976 album, "Destroyer", Simmons predicted: "Rap will die. Next year, ten years from now, at some point, and then something else will come along. And all that is good and healthy. I am looking forward to the death of rap. I'm looking forward to music coming back to lyrics and melody, instead of just talking. A song, as far as I'm concerned, is by definition lyric and melody, or just melody."

Simmons later responded to a Twitter user asking if the Rolling Stone quote was accurate. "Save this," he wrote. "Everything has it's [sic] day. Rock. Folk. Raga. Doo Wop. New Romance. Grunge. Alternative. Rap. Wait n see." He also tweeted: "Apparently pointing out that everything is cyclical — even music — is 'controversial.' People are very easily offended."