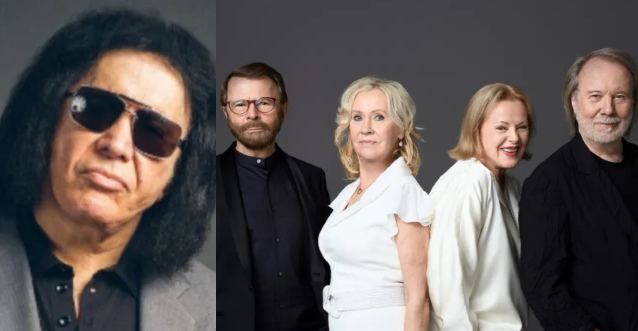 Gene Simmons has praised the Swedish pop quartet ABBA for its "undeniable songwriting".

The KISS bassist/vocalist expressed his appreciation for ABBA, which recently launched a virtual "ABBA Voyage" concert series in London, while discussing the 10 albums that changed his life with Goldmine magazine.

Speaking about ABBA's "Greatest Hits", Simmons said: "Yes, we like death metal, and yes, I like THE KILLERS and I like TAME IMPALA — I like all kinds of things. But what is it that rises to a level of greatness no matter the musical genre, it's the ability to craft songs that are forever. I was going to say THE BEE GEES, but it pisses off a lot of people, but those songs are undeniable. So if I'm riding in my car and ABBA music comes on, I turn it up and that's the sign of greatness. Undeniable songwriting. You just can't touch it. That's why I have to pick ABBA because it's just undeniable. I could have said THE FOUR SEASONS or THE BEACH BOYS because there's a wealth of great material."

With nearly 400 million albums sold worldwide, 17 No. 1 hits and over 16 million weekly global streams, ABBA is one of the world's most successful music acts of all time. Ever since their breakthrough with "Waterloo" back in 1974, ABBA's music has captured the hearts of people all over the world. Today, the songs they created — written and produced by Benny Andersson and Björn Ulvaeus and interpreted vocally with passion and commitment by Agnetha Fältskog and Anni-Frid "Frida" Lyngstad — are regarded as an important part of the international music canon. In the 21st Century, ABBA are more popular than ever. "ABBA Gold", originally released in 1992, recently passed its 1000th week on the U.K. album chart, the first album in history to reach this milestone. Content using the #ABBA hashtag on TikTok recently reached one billion views, without the catalogue officially being available on the platform. ABBA was inducted into the Rock And Roll Hall Of Fame in 2010, and "Dancing Queen", one of their most beloved songs, was added to the Grammy Hall Of Fame in 2015.

Following the announcement of the brand-new album, ABBA broke Universal's record making it the fastest ever pre-order of all time in the U.K. in just three days. The concert sold over 250,000 tickets in the first three days of going on sale and saw the digital versions of ABBA perform a set jam-packed with some of their greatest hits and much-loved songs, along with new tracks "I Still Have Faith In You" and "Don't Shut Me Down".