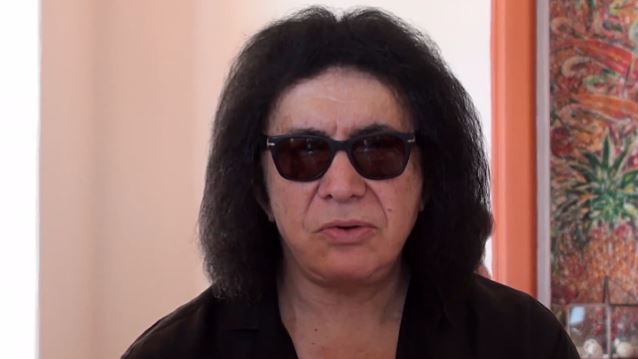 KISS bassist/vocalist Gene Simmons has responded to Ice Cube's declaration during N.W.A.'s Rock And Roll Hall Of Fame induction Friday that the rap act belongs in the institution.

'The question is, 'Are we rock 'n' roll?'" Cube asked the crowd as the seminal gangster rap group made their acceptance speeches. "And I say — you goddamn right we rock 'n' roll.

But on Saturday, Simmons tweeted his disapproval, asking the rapper to let him know when Jimi Hendrix will be inducted into the Hip-Hop Hall Of Fame.

Simmons tweeted a link to the BLABBERMOUTH.NETstory on Cube's Rock Hall comments and wrote: "Respectfully-- let me know when @JimiHendrix gets into the hip hop hall of fame. Then youll have a point. @icecube"

In a recent interview with Rolling Stone, Simmons predicted that rap would soon die out, and he'll be the first one to dance on its grave.

"Rap will die. Next year, 10 years from now, at some point, and then something else will come along," he told the magazine. "And all that is good and healthy. I am looking forward to the death of rap. I'm looking forward to music coming back to lyrics and melody, instead of just talking. A song, as far as I'm concerned, is by definition lyric and melody, or just melody."

Respectfully-- let me know when @JimiHendrix gets into the hip hop hall of fame. Then youll have a point. @icecubehttps://t.co/BRuU8t5vYe