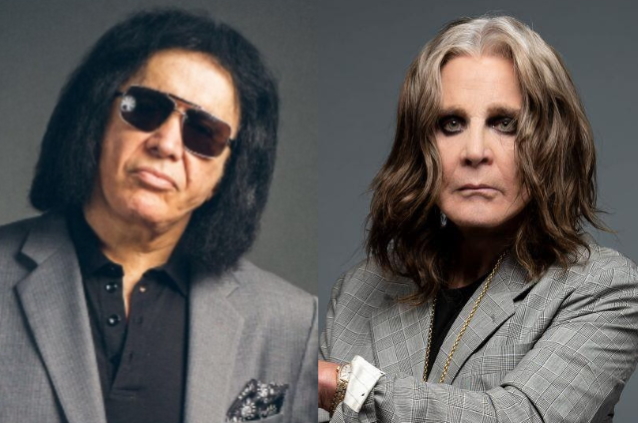 Gene Simmons has blasted Rolling Stone magazine for placing Ozzy Osbourne at No. 112 on its list of the 200 greatest singers of all time.

The updated list, which began in 2008, ranges from Aretha Franklin to Rosalía and other artists known for standout singing. This time around, the list excludes powerhouses like Celine Dion, Pink, Jennifer Hudson, Nat King Cole, Dionne Warwick and more.

Simmons weighed in on the list after being asked about it by a TMZ reporter. When the reporter noted that KISS was excluded from the list, Gene said (as transcribed by BLABBERMOUTH.NET): "Well, that's okay. I was thinking of buyingRolling Stone."

The KISS bassist/vocalist added: "Well, it's skewed. You have to consider who's popular and who's not. But if you really think about it, how good somebody sings may be part and parcel of what they do. For instance, if Jimi Hendrix, who had a long — well, actually a short career, but he was very famous, would he make it on 'American Idol'? How about Bob Dylan... And I wrote songs with Bob Dylan; I know the guy. Would he make it on 'American Idol'?

Gene continued: "How well you sing is not the most important thing. It's, do you have style? Do you have a fingerprint that says, 'I know that voice immediately'?"

Pressed about the fact that Ozzy made the list at No. 112, Gene said: "That's a crime. Look, somebody sits in a backroom — Jann Wenner [Rolling Stone co-founder] and those guys — they sit in a backroom and they decide things. Nobody asked me. Did they ask you? Apparently not."

Asked where he would have been on the list if it had been compiled properly, Simmons replied: "Oh, I don't give a fuck. Really."

As for whether any of the artists should care about such a list, Gene said: "No, they shouldn't. If you've got success, that's enough. Accolades and all that, you get that when you do a concert or when fans come up. That's the best thing. To be on a poll by a magazine by people in the backroom, I don't know how much that means."

The list was compiled by Rolling Stone staff members and contributors, unlike its 2008 list that used an "elaborate voting process".

The publication anticipated complaints from fans who disagreed with Rolling Stone's choices, writing in the introduction: "Before you start scrolling (and commenting),keep in mind that this is the Greatest Singers list, not the Greatest Voices List. Talent is impressive; genius is transcendent. Sure, many of the people here were born with massive pipes, perfect pitch, and boundless range. Others have rougher, stranger, or more delicate instruments… In all cases, what mattered most to us was originality, influence, the depth of an artist's catalog, and the breadth of their musical legacy."