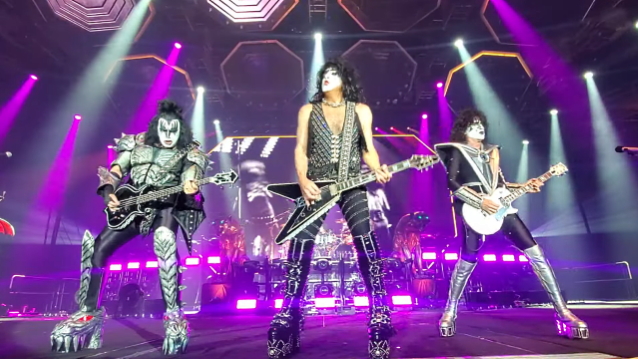 KISS bassist/vocalist Gene Simmons says that he knows exactly when the final concert of the band's "End Of The Road" tour will take place.

In a new interview with Page Six, Gene confirmed that KISS has pinpointed the exact date when he and his bandmates will play their last-ever concert.

"I know where and when, but I'm not [revealing yet]," he said. "I do know the last day and date. But you don't want to find out what you're getting for Christmas as a present in July, right?"

"We were honest about it. It wasn't a trickery or anything," Simmons told Page Six about the decision to continue performing after that tour wrapped. "We had the original guys, Ace and Peter, who were not performing up to snuff. It had to do with drugs and alcohol. I don't want to sugarcoat it. We decided, at that point, we should probably end it. I don't want to be up on stage and do a lackluster show. And then as we were about to stop, the fans were saying, 'Why don't you just replace them, like a football team?' We thought about it for a while and we said, 'Yeah!' We originally thought we can't exist without those guys, but you can. You know, a divorce is heartbreaking, but you'll get over it."

In October 2021, Stanley told Ultimate Classic Rock that he strongly believed KISS would be done touring "by the beginning of 2023," adding that "it seems only natural [for the final show] to be in New York. That is where the band started, and that was really the background for the band getting together and writing these songs and played loft parties and played clubs starting with an audience of probably 10 people," he said. "It seems we should go full circle."

Three years ago, KISS's longtime manager Doc McGhee said during a question-and-answer session on the ninth annual "Kiss Kruise" that KISS was open to reuniting with all former members at the final gig. "We want to include everybody that played with KISS to celebrate the 45 years of KISS," he said. "And everybody — Vinnie Vincent and everybody else — that [has] played with KISS is part of this whole celebration of [50] years. So, we're still looking at what we're gonna do on the final show of KISS."

According to McGhee, Frehley and Criss have both "been talked to" about participating in some form. But, he acknowledged, "It's pretty difficult. When people say, 'Oh, you should bring Ace and Peter up.' How do you do that when you have two Catmen and two Spacemen? So you say, 'Okay. You don't wear makeup and you wear makeup.' And then they [Ace and Peter] go, 'Well, that was my makeup.' I don't know. So it's real hard to do, but we'll figure it out because they're very much a part of the heritage of KISS. And they're acknowledged by Gene and Paul and everybody in this room as the founding members… So. it's important to you guys [and] it's important to us. It's just a matter of the balance and we can bring it where it works for everybody and everybody is having a great time."

In early 2019, Stanley told Australia's "Sunday Night" that "Rock And Roll All Nite" "has to be" the song that KISS performs as the last encore at the final concert of the "End Of The Road" tour. "That is the rock anthem that connects the world," he explained. "It was the start of other people coming up with anthems. They really didn't exist, per se. So, 'Rock And Roll All Nite And Party Every Day', that's a song that just connects with people on all different levels."

Simmons concurred, telling BUILD Series: "How do you not end with 'Rock And Roll All Nite'? We will have played that song, probably without exception, more than any other song we've ever been involved with. You might say, 'Aren't you sick and tired of hearing that?' But I will tell you the roar of the crowd, the smell of the grease paint, there ain't nothing like it. When you hear everybody getting jazzed about that and you get off the stage... [it's] like the fire in the belly. You're dog-tired; you've just done a big show; and you get up on that stage, when you see the joy in everybody's face... We've seen it all. We've been around for generations, but when you see a little 5-year-old kid in KISS makeup on his dad's shoulders who's wearing KISS makeup, next to his father... we're badass kind of guys — nothing affects us much — but that stuff will put a lump in your throat. You have to turn around for a second. It gets me. Yes, it's music, but it's generational, and it brings families together instead of separates [sic] them."