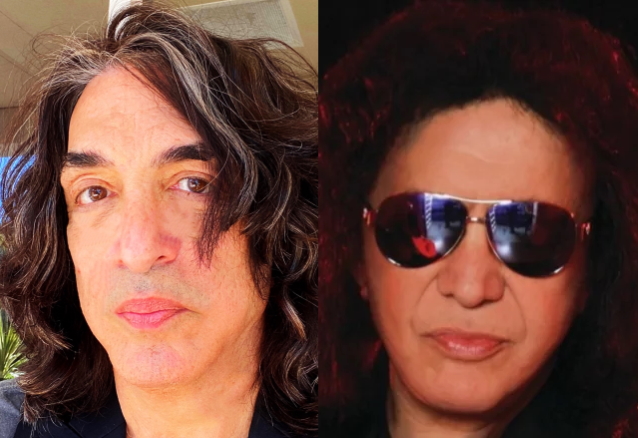 KISS frontman Paul Stanley says that "self-preservation" was the main reason he and KISS manager Bill Aucoin turned down the opportunity to work with VAN HALEN in 1976.

While KISS was in Los Angeles to tape a three-song performance for ABC Television's "The Paul Lynde Halloween Special", Stanley and Gene Simmons received an invitation from DJ and club impresario Rodney Bingenheimer to watch two unsigned local acts, THE BOYZ and VAN HALEN, at Starwood club. After the show, Simmons was introduced to VAN HALEN and he expressed a desire to work with the group, offering to sign them to his management label, Man Of A Thousand Faces, and to produce a demo for them to shop to record labels. Simmons ended up flying VAN HALEN to New York to record a demo at Electric Lady Studios, with Gene at the production helm. But he ended up not working with the group after Stanley and Aucoin expressed little interest in his demos.

Gene and Paul reflected on the episode during the question-and-answer session on this year's Kiss Kruise, which concluded earlier this month. While looking back on KISS's five-decade career, Simmons said (as transcribed by BLABBERMOUTH.NET): "We made one big mistake — one. There was a band called VAN HALEN. They were signed to Man Of A Thousand Faces Inc. There was a 24-track demo. They were owned lock, stock and barrel and signed and happy and wanted to sign with us, and we said no."

Stanley chimed in: "Thank goodness. The reason we said no was because part of Gene's joie de vivre, which means love of life, is he likes to look and do all different things. And sometimes that means reining him in, especially early on in the band's career where getting involved in other projects was really going to hurt the band. You couldn't listen to VAN HALEN and not think they were great. Bill knew it. I was with Gene when he first saw VAN HALEN at the Starwood. But the idea of managing or producing bands when we really were still at the beginning of our career was something that was… The move is called self-preservation."

Gene previously told the Los Angeles Times that he knew there was something special about VAN HALEN the moment he heard them.

"I was thinking, 'My fucking God, listen to these guys,'" he said. "As soon as Eddie started playing, the thing that struck me right away was that the guy was amazingly fast and light on touch… Eddie was just swimming over that fretboard, and I couldn't believe the control he had. Everybody's head just turned around like Linda Blair in 'The Exorcist': what is that?"

GenetoldPaul Brannigan, the writer of the Eddie Van Halen biography titled "Unchained" (U.S.) / "Eruption" (U.K.),that he couldn't believe it when Stanley claimed not to hear anything special about VAN HALEN. "Everybody shrugged their shoulders and went, 'So what?'" Simmons said. "And I'm going, 'You're killing me! Whaddya mean, 'So what?' Listen to that!'"

"I tore up the contract and said, 'You guys are free,'" Simmons told Brannigan. "I said, We're going out on tour, and when I get back, if you don't have a deal, I'll come back and I'll try to help you. But right now, I don't feel ethical in shopping your tape because the rest of the guys don't get it.'"