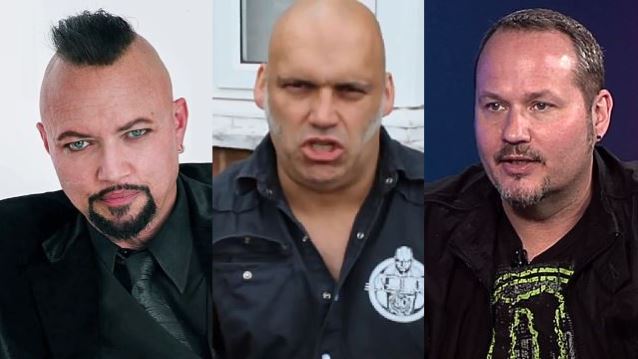 Geoff Tate (QUEENSRŸCHE),Blaze Bayley (IRON MAIDEN) and Tim "Ripper" Owens (JUDAS PRIEST) are coming to you live for a very special and limited run of dates.

Dubbed "Trinity", the trek will consist of the following shows:

TRINITY was previously thrown around as a name for a proposed all-star project featuring Tate, Bruce Dickinson (IRON MAIDEN) and Rob Halford (JUDAS PRIEST). Dickinson explained in an interview that the project's original name, THREE TREMORS, was going to be scrapped in favor of TRINITY because "we figured they would sue our ass if we called it the 'THREE TREMORS.'

He continued: "I actually came over to L.A. to do some writing for that album with Roy Z. We wrote about three songs, but then realized it was going to take us a lot longer than three weeks to write a project with three singers that would work.

"We wanted to make each song designed to be sung by three different characters as an integral part of the song, not something like, 'You sing the first verse, I'll sing the second verse, and he'll sing the chorus.' That would be a crap way to do it."

"It's a great idea; everybody loves the idea… We had marketing people salivating about the idea of a TRINITY project. But the bottom line is, the thing that is gonna sink it is if the music sucks. So I thought we should can the idea for now since we don't have time to do it. Rob was in the studio doing his album ('Crucible') and Geoff was writing a new QUEENSRŸCHE album, so that was it. It is an interesting idea, and I'm sure the live show would be really interesting, so perhaps in the future it will see the light of day."