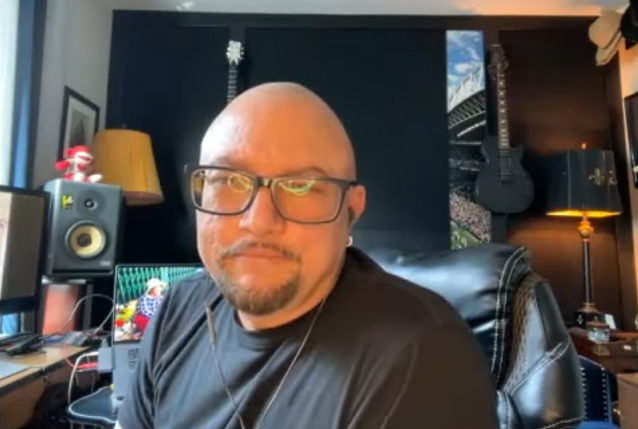 GEOFF TATE: 'I Don't Really Have Resentment Or Negative Feelings About QUEENSRŸCHE'

In a new interview with Metal From The Inside, ex-QUEENSRŸCHE singer Geoff Tate was asked if ever gets bothered by the fact that all of his current musical output is always compared to his previous works with his former band. He responded (as transcribed by BLABBERMOUTH.NET): "I suppose it would probably bother me if I really paid attention. I don't, so... [Laughs] Music is something that I need to do — it's something that I need to be part of. So I feel just very blessed that I'm given these opportunities to work with different musicians and to be part of creating an interesting musical presentation. And I'm equally grateful for anybody's interest in it. 'Cause there's a lot to choose from, there's a lot to listen to. And years go by, and people change their tastes in music, and they grow up, or they go look for new things. And I'm just very happy that people are interested in what I'm doing."

Tate went on to say that he never had any reservations about continuing to perform music that he wrote and recorded with QUEENSRŸCHE. "I've always embraced playing my music," he said. "I can't imagine not playing those songs in a live situation. And I don't really have resentment or negative feelings about QUEENSRŸCHE. To me, it was an amazing time. We accomplished a lot of things. We wrote some incredible music and had some amazing tours. I think we've definitely left our mark in the metal world. But then again, times change and people move on and do different things. And that's what I'm doing."

Geoff has gone back and forth on the subject of a possible reunion with QUEENSRŸCHE, telling The Rock Vault in November 2019 about the prospect of rejoining his former bandmates: "I think that would be something that makes sense, and I think it would be an interesting thing to do, if everybody could get in the same room and actually talk to each other." However, just eight months earlier, he dismissed the possibility of a QUEENSRŸCHE reunion, telling Greece's "TV War" that he had "no interest in that. No. Not at all. [I have] absolutely no reason to," he said. "I don't need the money. That'd be the only reason to do it. Maybe if they paid me, like, 10 million dollars or something like that. [Laughs]"