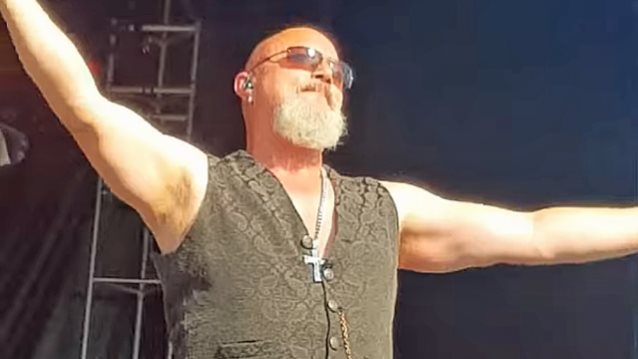 GEOFF TATE On AVANTASIA's TOBIAS SAMMET: 'He's Become One Of My Favorite People'

On December 17, former QUEENSRŸCHE singer Geoff Tate was interviewed on 99.1 CJAM-FM's melodic metal radio show "The Signals Of Intuition". You can now listen to the chat below.

Speaking about his collaboration with AVANTASIA on tour in Europe this past summer, Tate said: "I sang three songs, and it was fantastic. [They're] great, great band, and working with Tobi [AVANTASIA mainman Tobias Sammet] was fantastic. He's become one of my favorite people. [Laughs] He's got a great sense of humor — an absolute great sense of humor — and doesn't take himself too seriously. And one thing I really like about him is he's very giving and open to other musicians, which is kind of different than my experience, 'cause a lot of musicians are a little bit insecure and they worry about people showing them up — they're kind of competitive. And he's not like that at all — he'll just hand you the stage and go, 'Okay, go. I'll be over here.' [Laughs] And just let you go to town and do your thing. He's not worried about being showed up or anything like that; it's not entered into his mind, I don't think. He's just a very open, giving, expressive human being who is just purely wonderful. I really appreciated that, because there's nothing worse than having somebody trying to tie your hands behind your back and say, 'Okay, do it, but here, balance on one foot.'"

Asked if he is planning on taking part in more collaborative projects in the future now that he is done recording his trilogy of albums with OPERATION: MINDCRIME, Tate said: "I don't really have a clear vision of what I'm going to do in the near future, creatively. I'm kind of dedicating the rest of the year — or 2018, I should say — to touring, which is really kind of number one on my list of things to do. I have a lot of places I've gotta get to. But I am completely open to doing guest appearances with people's projects, and I love collaborating with people. I had a really great time with Tobi and AVANTASIA on the record and touring. Just two weeks ago, I was in Brazil playing a show with a wonderful Brazilian band called ANGRA. I went and sang a song of theirs and they played a couple of songs of mine during their show. It was just really fun. They're really fantastic players too."

Tate was one of the featured singers on AVANTASIA's seventh album, "Ghostlights", which was released last year via Nuclear Blast. Geoff could be heard in the song "Seduction Of Decay", which was described by Sammet as "a seven-and-a-half minute-monster." He added about Tate's performance in the track: "I am speechless! Geoff has made it a killer; [it] reminds me of his 'Rage For Order' era.

"I grew up with QUEENSRŸCHE," he continued. "Geoff influenced a lot of us singer people, and listening to that track, I know why."

Sammet previously said about his decision to enlist Tate to sing on the latest AVANTASIA album: "I have been fortunate enough to meet many amazing classic metal vocalists. Whenever we've talked about our influence as vocalists, the name Geoff Tate was brought up.

"Throughout his incredible career of more than thirty years, Geoff has constantly explored new territory as an artist and vocalist, while he has always managed to maintain this distinctive signature vocal sound that makes him stand out.

"His contribution [to 'Ghostlights'] sounds nothing but amazing, and you will immediately know why the man had such a huge impact on vocalists and fans around the globe! Enchanting, unique, amazing, progressive in the purest sense of the word!"

Issued earlier this month, "A New Reality" is part three of a trilogy of OPERATION: MINDCRIME records following Geoff's albums "The Key" and "Resurrection", both of which were also released through Frontiers Music Srl.

Tate recently recorded a brand new song in support of charity. All proceeds from the track, which will be released later this month, will benefit MercyWatch, a nonprofit focused on outreach to the homeless community in Snohomish County, located in the U.S. state of Washington, where Tate lives with his family.