Original QUEENSRŸCHE singer Geoff Tate has told the "Iron City Rocks" podcast in a new interview that he never expected to be spending most of this year celebrating the 30th anniversary of the band's landmark concept album "Operation: Mindcrime". "You never even know when you're making an album that it's going to affect people the way it does; you have no idea," he said (hear audio below). "But when it does, it's something that you have to wrap your head around and understand it and respect it. And I'm shocked — I wasn't planning on doing a 30th-year-anniversary tour of this album, but I got so many requests from promoters around the world [who wanted me] to do it that I started thinking, 'Gosh, it'd be silly for me not to, 'cause there's so much demand for it.' And I'm really glad I did, because I really have come to appreciate the album in a lot of different ways now, more than I had already."

Tate went on to say that this might be his "last time playing the whole album in its entirety. 'Cause [when] the 40th anniversary [comes around], I'm gonna be in my 70s," he laughed. "I don't know if I'm gonna be the same person in my 70s as I am now. So this might be it."

Asked what is next for him once he completes the "Operation: Mindcrime" 30th-anniversary tour, Tate — who released three albums in three years as part of a trilogy ("The Key" [September 2015], "Resurrection" [September 2016] and "The New Reality" [December 2017]) with his band OPERATION: MINDCRIME — said: "I just spent three years making these three albums. It was a real love affair for me, and that is over now. I've finished the records, I put them out, and now I feel very free to begin something new. But I'm really sort of focused on touring this whole year. I'm booked up until the end of December holidays, and after that, I'm gonna take a little time off. But then I have a wonderful experience, for me — I'm looking forward to it. I'm touring with one of my favorite bands, AVANTASIA, next year on their big tour. They have a new album coming out, I believe in March, and that's when the tour begins as well. So I'll be touring with them as a special guest, and I'm really looking forward to that. I know they're not really known well in the United States, but they're very popular in Europe and South America and Asia."

Tate's "Mindcrime" set covers all fifteen songs from the album including such fan favorites as "Revolution Calling", "Operation: Mindcrime", "I Don't Believe In Love" and the closing track, "Eyes Of A Stranger". As fans might remember, Geoff performed the album in its entirety on tour in 2013 to celebrate its 25th anniversary.

Proving the music has stood the test of time, in 2006, Geoff and his QUEENSRŸCHE bandmates brought the theatrical interpretation of the "Mindcrime" saga to audiences all over the world. In October of that year, an epic performance was filmed and recorded, resulting in "Mindcrime At The Moore", an album/DVD set released in July of 2007 that would debut at No. 1 on the Billboard Music DVD chart. It would mark the band's first No. 1 chart debut, quickly selling over 50,000 units, achieving gold status. 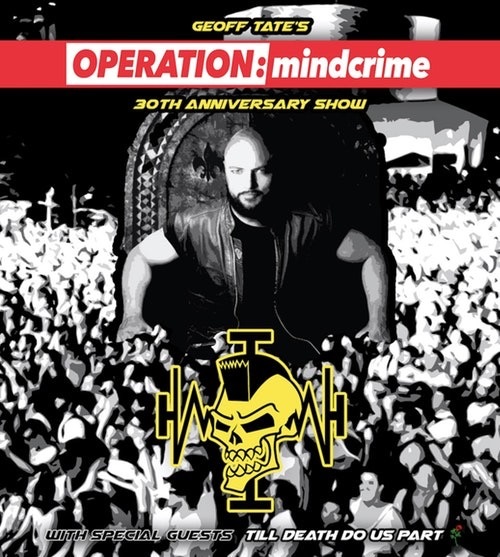