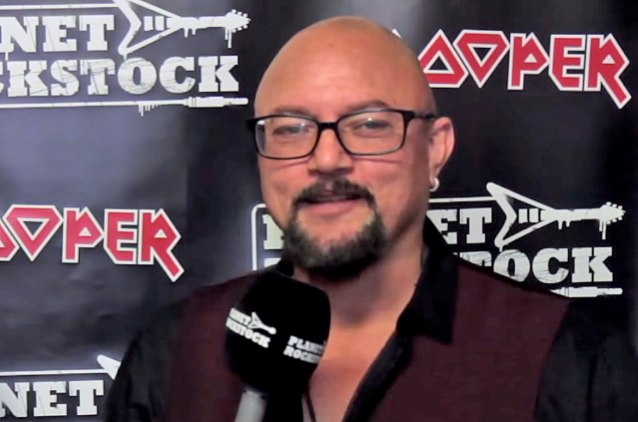 GEOFF TATE Will Spend Much Of 2019 Touring With AVANTASIA: 'It's Gonna Be Real Fun'

During an appearance at this year's edition of Planet Rockstock, which was held this past weekend at Trecco Bay in South Wales, former QUEENSRŸCHE singer Geoff Tate spoke about his plans for next year. He said (see video below): "Well, I am touring, touring, touring. I finish out this year. It's been a fantastic year of supporting the 30th anniversary of [QUEENSRŸCHE's] 'Operation: Mindcrime', the release of the first album. And I've been touring since last January, almost continuously. At the end of the year, I have a month off, and then I start up again for a few weeks of touring here in Europe, actually. And then I start a really interesting gig with a German band called AVANTASIA. [It's] a lot of moving parts and a lot of incredible singers, and I'm one of the singers. And I've contributed vocals on the latest album ['Moonglow'] that's just coming out [in February 2019]. And we're doing a world tour. So I'll be on that for the rest of 2019… It's gonna be real fun."

Tate previously guested on AVANTASIA's seventh album, "Ghostlights", which was released in 2016. Geoff could be heard in the song "Seduction Of Decay", which was described at the time by AVANTASIA mainman Tobias Sammet as "a seven-and-a-half minute-monster." Tate was also one of the guest vocalists for AVANTASIA at several European shows in the summer of 2017, including Rock Fest Barcelona, where QUEENSRŸCHE also appeared on the bill.

For most of 2018, Tate has celebrated the 30th anniversary of "Operation: Mindcrime" by performing the iconic concept album live in its entirety.

Tate's latest musical endeavor, OPERATION: MINDCRIME, has released three albums over the past three years as part of a trilogy: "The Key" (September 2015),"Resurrection" (September 2016) and "The New Reality" (December 2017).