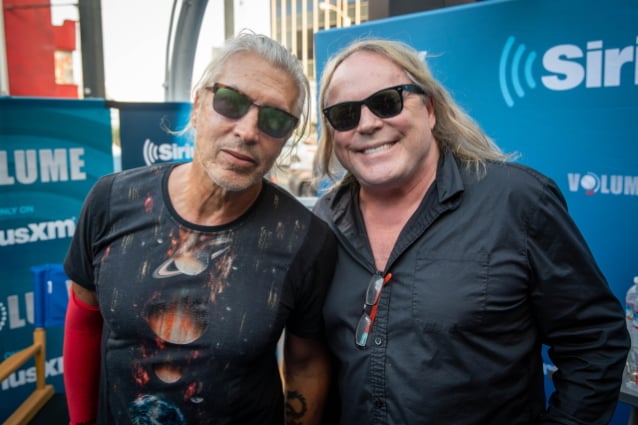 In a new interview with Jeff Gaudiosi of MisplacedStraws.com, George Lynch was asked if there has been any talk of more shows featuring the reunited classic lineup of DOKKEN. He responded: "I've actually been talking to Don [Dokken] a little bit, and we're both in agreement that that should probably happen — meaning some kind of a meaningful reunion done in the right way, carefully and with proper preparation and time and rehearsals and not just throwing it out there like we did last time." George went on to say that "the obvious choice" to replace DOKKEN's recently retired drummer "Wild" Mick Brown would be Mick's brother Steve, who can be heard playing alongside Lynch and ex-DOKKEN bassist Jeff Pilson on the upcoming THE END MACHINE album, "Phase2".

"I think I was slightly disappointed in it — not overwhelmingly disappointed, but I have some regrets," he said (as transcribed by BLABBERMOUTH.NET). "I wish we had prepared more. And I know we all feel that way. 'Cause of the logistics, we all had things we had to do right after the time we had allotted and beforehand. So we just were barely able to even pull it off with everybody else's pre-existing commitments. The fact that we got to do it at all was… you know, we were fortunate for even being able to pull it off. So we were a little underprepared, I feel. And yes, we were offered a good amount of money to go to Japan and do some other things, so it made it just kind of a no-brainer."

Over the past four years, Lynch has appeared on recordings by THE END MACHINE, KXM, ULTRAPHONIX and SWEET & LYNCH.