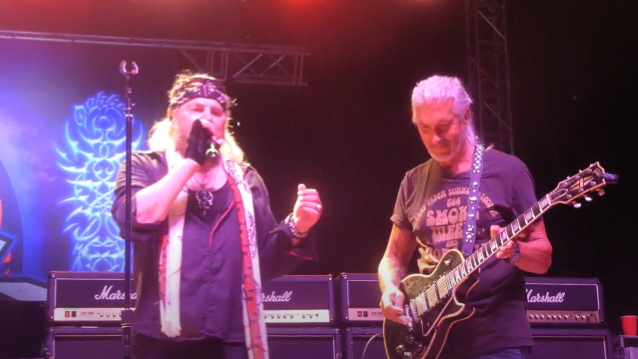 For much of the past year, George Lynch has been rejoining DOKKEN on stage at various shows to perform three of the band's classic songs: "Kiss Of Death", "When Heaven Comes Down" and "Tooth And Nail". Asked in a new interview with SiriusXM's "Trunk Nation With Eddie Trunk" what the experience has been like for him, George said (as transcribed by BLABBERMOUTH.NET): "It has been [fun], actually, more than I would have thought. I would have thought there… 'Cause Don [Dokken, DOKKEN leader] and I had had animosity towards each other at a couple of different levels over the decades. And it's kind of a weird thing, when you think about it. And sometimes, it is uncomfortable for me, because when I show up, I have to sit there, and, of course, they're playing the songs that I wrote. And the [current DOKKEN] guitar player, Jon [Levin], is a wonderful guy; we're friends. But they're doing my whole thing, and then I walk out.