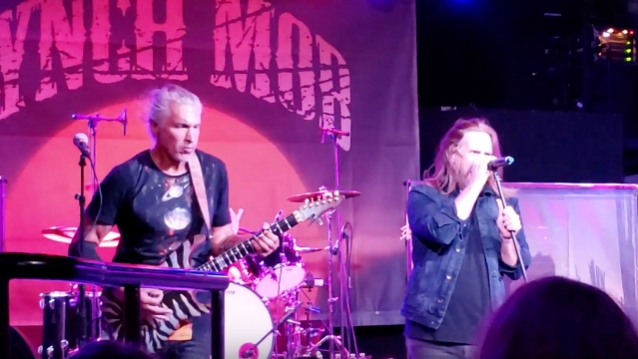 George Lynch has confirmed that the next LYNCH MOB album will feature vocalist Andrew Freeman, who has been playing select shows with the group following last year's departure of Oni Logan.

"Andrew is in the band," the guitarist told "The Right To Rock" in a new interview. "LYNCH MOB is a fluid device [laughs] and a revolving door. And that's okay. I've learned to live with that and sort of embrace it. But Andrew also has LAST IN LINE, so he has a foot in both camps. So when he's not touring with LAST IN LINE, his other band, he'll be touring with us."

Joining Lynch and Freeman on the next LYNCH MOB album will be drummer Jimmy D'Anda and bassist Sean McNabb. "So it's basically the same lineup as the last record but with a different singer," George said. "And we are in pre-production and already about five to six songs deep. But not completed songs — they're skeleton arrangements right now and a work in progress. This will be a next-year record — early next year, I imagine."

Logan announced his latest departure from LYNCH MOB in January 2018, explaining that he was "looking forward to writing with other artist and bands."

Oni first hooked up with LYNCH MOB in 1990, but exited the group after the release of its first album, only to rejoin the Lynch-led outfit in the late 2000s.

LYNCH MOB's most recent album, "The Brotherhood", was released in September 2017 via Rat Pak Records.