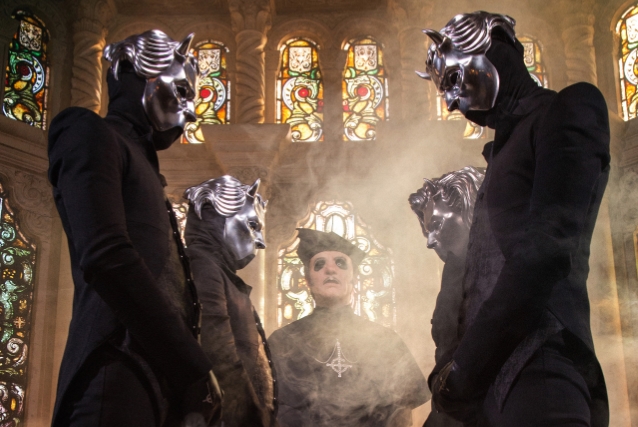 Seven new dates for the "Ultimate Tour Named Death", GHOST's six-week North American headline arena tour are announced, adding shows in Edmonton, Toledo, Moline, Youngstown, Huntington, Hamilton, and Ottawa. A series of ticket pre-sales begins today at 12 noon local, and the public on-sale starts at 10 a.m. local this Friday, May 24. Log on to ghost-official.com for all pre-sale, VIP packages, and ticketing details. With NOTHING MORE providing support for the tour and TWIN TEMPLE supporting on the September 28 SLC date, the Frank Productions Concerts-produced fall dates kick off on September 13 in Bakersfield, California and run through to October 26 in Glens Falls, New York.

GHOST has just wrapped up leg one as special guest on METALLICA's 25-date "WorldWired" summer European stadium tour, with leg two set to run from June 8 through June 20.

Earlier in the month, GHOST mastermind Tobias Forge confirmed to Revolver that he will return to the studio in January 2020 to begin work on the band's follow-up to 2018's "Prequelle" album.

Forge revealed his plans for the fifth GHOST studio LP: saying, "I want to make a different record from 'Prequelle'. I want it to feel different... I definitely have a darker, heavier record in mind." Forge added that "Prequelle" turned out to be "a little ballad heavy."

Forge told The Pulse Of Radio what he had learned about the songs on "Prequelle" from playing them live for much of the past year. "I've come to realize that the songs on the record are very diverse," he said. "Not that I didn't understand that before, but I've definitely felt it now, playing them. Definitely a lot of the 'Prequelle' material is varied, which I like. It fits very well into a live set that is very long."

"Prequelle" debuted last June at No. 3 on the Billboard 200 chart. It has yielded the chart-topping "Rats" and "Dance Macabre", a well as the new single "Faith".