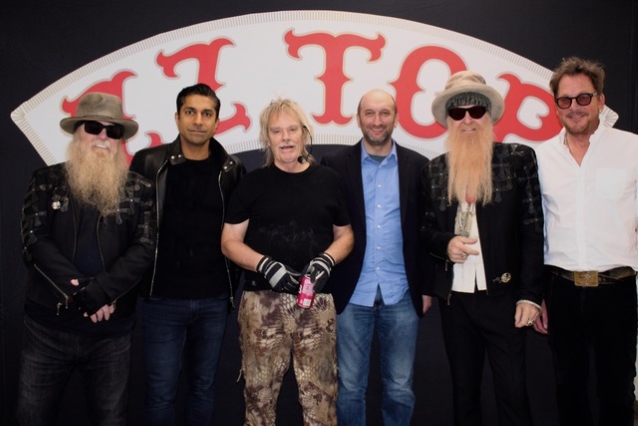 "Sharp Dressed Man" is an outrageous, bawdy musical romp about a Lone Star auto mechanic who becomes a modern-day Robin Hood, stealing hearts — and car parts — with the help of his merry band of beer drinkers and hell raisers. Featuring ZZ TOP's most beloved songs, including "Legs", "La Grange", "Gimme All Your Lovin'" and "Cheap Sunglasses", "Sharp Dressed Man" is a rock musical with a wicked sense of humor and a heart as big as Texas.

Producing the show with Caesars Entertainment are Carl Stubner, ZZ TOP's longtime manager and executive producer of the documentary "ZZ Top: That Little Ol' Band From Texas" and Prem Akkaraju, executive producer of "Tomorrowland: Ten Years Of Unity, Love, Madness And Magic" on MTV and "The White Tiger", feature film adaptation of the Man Booker award-winning novel of the same name.

The show's book is written by Robert Cary and Jonathan Tolins. The duo wrote the teleplays for Fox TV's Emmy-winning "Grease Live!" as well as "A Christmas Story Live!"Tolins is known for the long-running off-Broadway hit "Buyer & Cellar" for which he won a Lucille Lortel Award. He also wrote the films "The Twilight Of The Golds" and "Martian Child" (written with Seth E. Bass). He is currently a co-executive producer of "The Good Fight" on CBS All Access. Cary is co-author of Broadway's "Summer: The Donna Summer Musical", "Flashdance The Musical", and directed the films "Ira And Abby" and "Anything But Love".

"We're excited about this fantastic project and look forward to hearing our music in a new innovative context," said ZZ TOP's Billy Gibbons. "Fans have often told us that we've provided the soundtrack to their lives, and this is very much in line with that kind of enthusiastic thinking."

Prem Akkaraju commented, "Pairing ZZ TOP's iconic music with a Texas-version of the Robin Hood story delivers countless laugh-out-loud moments for audiences of of all ages. It's an absolute blast."

"I know firsthand that ZZ TOP is an enduring phenomenon; they're now about to celebrate 50 years of rocking audiences around he world," said Stubner. "The show that Prem, Michael, Jason and I envision will utilize the band's music and tremendous energy for audiences in a new immersive realm. This, just like ZZ TOP, is all about having a good time at a great party and telling fun stories through their music."

Jason Gastwirth, president of entertainment at Caesars Entertainment, said: "ZZ TOP holds a special place in American music history. Their songs incorporate rich imagery that lends itself to the narrative form. The addition of 'Sharp Dressed Man' to our already diverse entertainment lineup is exactly the component we are excited to welcome to the family for our guests."

"We are at a time where Las Vegas is recognized to have some of the most amazing artists in the world from all eras, and we are excited to have the opportunity to bring to the stage a musical that has some of the best songs of a generation, with some great actors of today, enabling us to have an incredibly creative and successful show in the future," added Michael Gruber, chief new business officer for Caesars Entertainment.

ZZ TOP, whose lineup has remained constant since 1970, continues to be one of the world's top touring attractions. This past weekend they embarked on a run of three sold-out concert dates on their home turf — Dallas, Houston, Austin — and have set an extensive tour schedule to follow throughout Europe and back in the United State this spring, summer and fall in connection with the ongoing celebration of their 50th anniversary.