GHOST has announced the fall 2019 European leg of "The Ultimate Tour Named Death". The trek will launch on November 16 in Nottingham, U.K. andd will end on December 19 in Toulous, France. Support on the tour will come from ALL THEM WITCHES and TRIBULATION.

GHOST mastermind Tobias Forge recently confirmed to Ireland's Overdrive that he is planning on entering the studio in early 2020 to begin work on the follow-up to 2018's "Prequelle" album.

"I think about it all the time," he said. "But let me be very transparent here. I am indeed going into the studio where I will be beginning the work in January. We're doing another American tour in September/October and then we're gonna come back to Europe and that is gonna take us right up until Christmas, basically. So, after New Year's, we are gonna have maybe one or two small things at the beginning of the year and then it's gonna be all about the new album.

"People need to understand that I spend about five to six months in the studio," he continued. "That's not with red lights going or anything. [Laughs]. But it's just being in that creative environment, you know? I also try to work 'normal' hours, because I have a family also, so, I try to work traditional hours. I like to come in on Monday morning at about 9 a.m., 10 a.m. and then I do normal stuff like have lunch and think about what's going on, and then I wrap up for the day and head home and see my family.

"Unfortunately, or fortunately, depends on how you see it, the U.S. elections are happening, so bearing that in mind, it's not the best time to release new material when people's minds are focused on other things. I just want to make sure that when we release this new album, we have people's attention."

Forge said that the "plan" is to complete the new album by the end of the summer of 2020, "but in the event that it's not finished, it's gonna be okay. I don't want to stress the situation," he said. "Every record I've done has been under some type of time restraint, even 'Opus Eponymous' (2010); that album was on a very tight schedule. It was definitely last minute. [Laughs]. I just want to make sure that I have enough time to release the album that I'm thoroughly happy with.

"When strategizing about where GHOST is right now and where we want to go moving forward, we have to be aware of all the possibilities regarding the best time to release the new album," he explained.

Asked when he sees the new GHOST album finally being released, Forge said: "I would say by early 2021 you can expect the next chapter of the GHOST story."

GHOST is spending the bulk of its summer as special guest on METALLICA's four-leg "WorldWired" European stadium tour. Leg one saw GHOST playing to more than a quarter-million fans; leg two kicked off on June 8, and legs three and four will take place July and August. GHOST will perform at Heavy Montreal on July 27, and then kick off its North American "Ultimate Tour Named Death" headline arena tour on September 13.

"Prequelle" debuted in June 2018 at No. 3 on the Billboard 200 chart. It has yielded the chart-topping "Rats" and "Dance Macabre", a well as the new single "Faith". 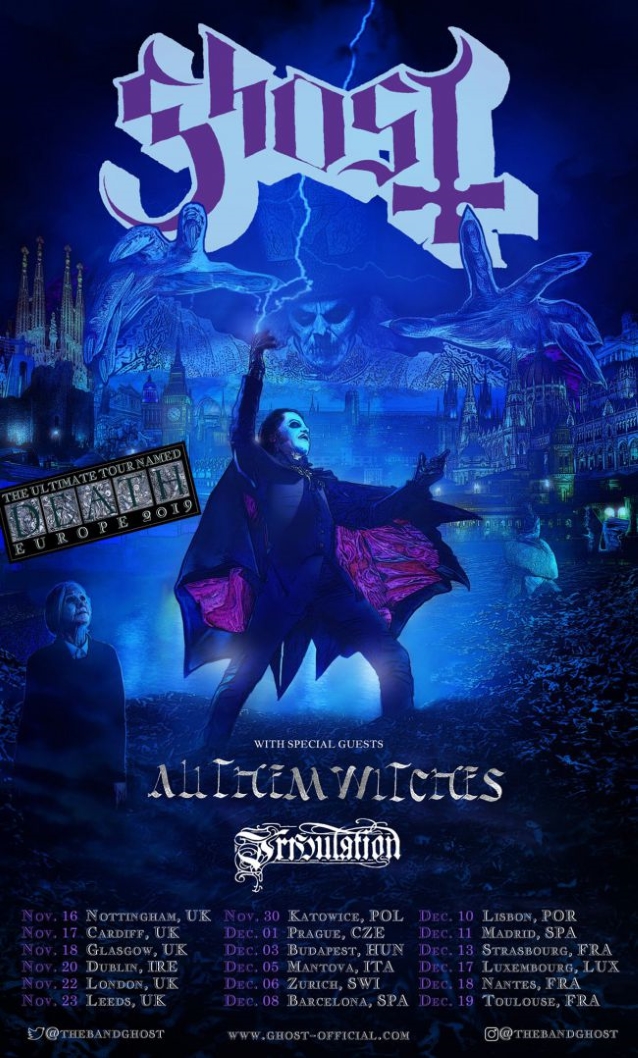