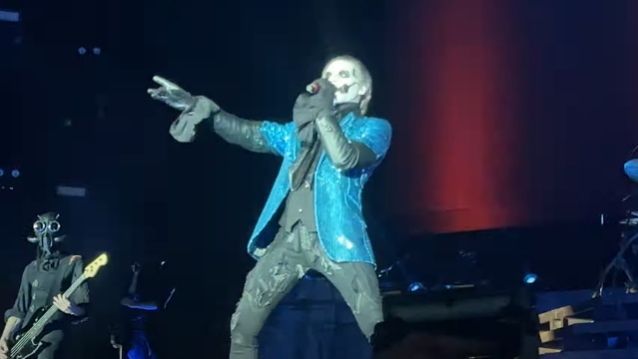 GHOST was forced to cut its performance at the French festival Hellfest short last night (Saturday, June 18) due to frontman Tobias Forge losing his voice.

After performing the song "Dance Macabre" in Clisson, Forge told the audience: "My voice is completely fucked. I cannot sing one other song for you."

As a result, GHOST was unable to perform what has been the closing track of the band's recent shows, "Square Hammer".

Prior to Hellfest, GHOST had last performed at the final show of the group's European headlining tour on May 18 in Budapest, Hungary.

Earlier Saturday night, GHOST performed the song "Griftwood", from the band's latest album "Impera", live for the first time. The track takes aim at Donald Trump-era U.S. vice president Mike Pence who led Christian evangelicals into becoming apologists for what many believe was the most destructive president of modern times, while at the same time preaching righteousness and goodness.

"That song's about him and anyone like him who's willing to soil everything they've worked for," Forge explained to Kerrang! magazine earlier in the year. "They definitely qualify for a front-row ticket to Hell. Which is so ironic, because that's what they believe in. [People like that] completely demean themselves, and just eat shit out of someone's ass in order to achieve whatever they're trying to achieve.

This past March, GHOST's fifth album, "Impera", sold 70,000 equivalent album units in the U.S. in its first week of release to land at position No. 2 on the Billboard 200 chart. It marked the third top 10 album — and fifth top 40-charting set — for the Swedish occult rock act.

Regarding his collaboration with Åhlund, Al Fakir and Pontare, as well as OPETH's Fredrik Åkesson who was brought in to sharpen the album's guitar attack, Forge told St. Louis Post-Dispatch: "I found that I can work really well with someone I respect, who is always pushing for the best. They make me want to write better, to get my game up a little."

Forge performed as a "new" Papa Emeritus on each of GHOST's first three LPs, with each version of Papa replacing the one that came before it. Papa Emeritus III was retired in favor of Cardinal Copia before the release of "Prequelle".