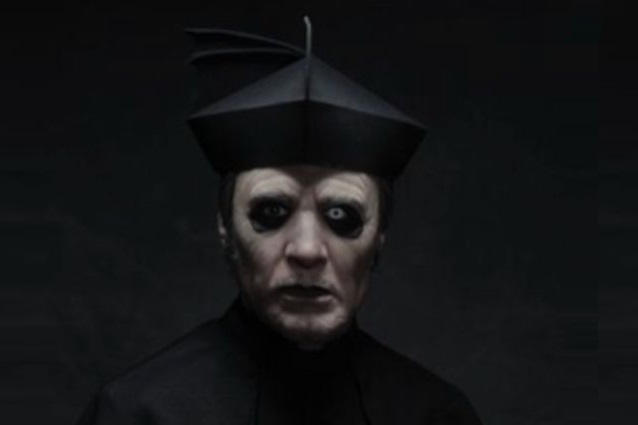 GHOST Leader Says GRAMMY Win 'Meant The World': 'You Can Take That Home To Your Mom'

During his first public "unmasked" interview, which took place at Los Angeles's Grammy Museum on May 1, GHOST frontman Tobias Forge discussed a wide range of topics. A few excerpts follow (as transcribed by BLABBERMOUTH.NET):

On his writing process:

Tobias: "In my head, it's always, like, big piles of stuff that you try to distribute [appropriately]. Since I'm constantly thinking about this record being one out of several, it's easy to just put something aside [for future use]. I am writing the next [album] now. Whatever that record will turn out to be will be determined over the course of two years. Right now, I'm just piling stuff up, and I might be going back to an idea for this or that song. Sometimes, I just take what feels like a song and pull out a section, and [say], 'Okay, this is going to be the intro.'"

Tobias: "By sheer luck, we did our first tour of America as a headlining act. Originally, we were going to go out on tour together with ENSLAVED. You've probably heard this many times, but there is a little bit of an issue when you're a European band and you're trying to get a [work] visa. If you're applying for a visa here and you're a band, you need to supply the State [Department] with press and things that verify that you have been a band for a year, and that you're known. We had just gotten a record out and were anonymous. We'd formed, like, two weeks ago. It was very challenging. The tour was already on sale. There was a huge buzz about us, I guess about them and the tour, and we had to pull out. That apparently was not popular, and our agent — Nick Storch, who's still with us now — said that, 'Well, it's going to be hard to find another tour that will mimic this tour that you just canceled. The only way you can really do it is if you [headline]. I'll just try to book a similar tour and similar venues, and we'll see what happens.' So we did, and that was fantastic... I grew up in Sweden. It's a profoundly Americanized country. We have a strong tradition of Americana, and always had non-dubbed American television, and embracing American culture a lot, so I always knew that I wanted to go to America. At that point, when we were in the whole troublesome situation with that canceled tour, I just felt like, 'Well, if we're going to put our eggs in some basket anywhere, it needs to be over here,' because I think that here is where shock-rock, in many ways, started."

On whether the group is received differently by fans in different countries:

Tobias: "It's hard to really put your finger as to what are the differences, but I think that there seems to be a general cooperation here [in America] where people allow themselves to actually be entertained. This is where you invented wrestling. There are definitely places in Europe that are a little more like, [looks perplexed] — 'I don't know about this.'"

On using humor as a tool:

Tobias: "In the show, I think it's very important. I try to refrain from that on the albums. Traditionally, the records are a little bit more serious, and the live shows are slightly less. Once we got out touring and we started doing that, there's a ton of progress and things that happened due to the fact that we were playing live. Originally, I had the idea that we weren't even going to do interviews, and Papa was not going to say anything on stage. Fifty shows into that, it felt like, 'This is not working — this feels weird.' You want to move, and sooner or later, you come up [to the microphone]: 'Hello?' It sort of went from there in various directions. [But] I think it's important to see them as two different things. The albums [are] basically the soundtrack. That's the concrete, text form, and the the live show is something else."

On Zbigniew Bielak, the Polish artist who designed the cover for new album "Prequelle":

Tobias: "He has done the majority of our record sleeves. Tremendously talented. He's an architect by trade, which I guess gives you an idea why it's so [detailed]. He's quite an anal dude. Often times when I make a record — especially now, because now I know how long it takes to do the amount of work that he needs to do in order to make the [artwork] — we've tried to begin as early as possible and for me to sort of explain what the songs are about, which is not always easy, because that has a tendency to change sometimes. It escapes me now, but on 'Infestissumam', there was one track that sort of shifted the lyrical meaning, and all of a sudden, one instrumental got a lyric or the other way around. If you look at the label on the record, that has a design I think that isn't represented somewhere, and that was a typical case of that. But we discuss a lot."

On his formative musical influences:

Tobias: "I come from a home that had a lot of music played in general. My mom, born in the '40s, so she had a whole sort of '60s with her — [Bob] Dylan, Janis Joplin, THE BEATLES, [THE ROLLING] STONES, all that. That was in one ear, and then I had my brother who was 13 years older. He also was an avid music fan in general, and had the radio on and the TV on all the time. It was a constant feed, but I guess the first band that really got me enamored was KISS. Before I got to kindergarten, I went to what we call 'Day Mom' in Sweden. This must have been 1984, and I was three years old. I remember the first thing I learned how to write, because I asked her daughter if she can show me how to write, was 'Heaven's On Fire'. I still revere them, obviously, but after that came so much more. Specifically for this band, there's obviously KISS and Alice Cooper, of course, and KING DIAMOND. There's a lot of mixed-in things."

Tobias: "They had absurdly good songwriters. They wrote really good songs. I'm a big fan of a lot of prog music. As a record collector as well, I won't throw anybody or any band under the bus, but at lot of the records are fun to collect are not necessarily very good. There are a lot of prog bands out there that it's a really cool record, but it's, like, not really there. A lot of kraut records as well — it's just, like, 20 minutes of tuning. Making the record took 40 minutes. That doesn't make them less pleasant, but it's just not as crafted as, for example, URIAH HEEP. It's not a coincidence that the biggest prog bands around are PINK FLOYD, GENESIS, YES, URIAH HEEP, JETHRO TULL — the ones that really wrote fucking hit songs. The funny thing about URIAH HEEP is also the fact that a lot of their records are sort of, every other song is a prog song, and then every other song is just a rock and roll [song], and it works really well. The energy of a lot of these songs was something that I definitely tried to mimic. With our first three albums, we had an opening track that always had that sort of triplety [rhythm]. That is completely stolen from URIAH HEEP."

On what it meant to him to tour with IRON MAIDEN in 2017:

Tobias: "First off, they were obviously one of my favorite bands from when I was a kid. They had a huge impact on most kids that were into hard rock. In many ways, they're the perfect embodiment of a hard rock band, with super-strong image, let alone the songs. As a kid, I was always very interested in touring and the whole showmanship of big shows and arenas and all that stuff. I don't know how many times I've sat with 'Live After Death' and just looked at all the tour dates and the list of all the strings and shit that they had. You remember how the booklet for that record was? It was filled with all the dates [from] the big 'World Slavery' tour. They played, like, five dates in Wisconsin. It's insane — typical, mid-'80s good old days where you could tour everywhere, and they played arenas, and it was huge. I always had that, 'That's how you do it.' I had a map book at home and drew out the tour that they did — like, this is how you do it. This is how you're supposed to tour. That might give you a wink why we're doing it the way we do, and the level of touring and the amount of dates you need to do in order to promote a record. By the time that we got a little bit of speed and got up to festivals where they were playing, and also when we aligned ourselves with our management here in L.A. who were sort of in that family with the same managers, and we started opening for IRON MAIDEN [and] METALLICA, we found that despite [there] being an age difference, obviously, and we came from different countries, I think that we had a lot of similar intentions with the show that we wanted to bring forth. Obviously, I guess it goes without saying, a lot of the graphics that we're doing [are] very inspired by that era in the first place, but specifically a band like IRON MAIDEN, who has strong visuals and you can spot anything that they've done throughout this time. You can see immediately that that's an IRON MAIDEN thing. That's one thing that is really, really inspiring to me."

On winning the Grammy for "Best Metal Performance" in 2016:

Tobias: "It meant a lot. It meant the world. I guess it means a lot to anyone, but from a Swedish standpoint, it was a great recognition because frankly, there's not a whole lot of Swedish artists that gets it. To cut it short, I was 29 when we sort of broke through with GHOST. Let's just say that I've spent a lot of time being not very successful. When you're not successful as a musician, you are oftentimes unemployed. Many, many occasions in my life, I've had that weird [conversation], 'So, what do you do?' 'I'm a musician. Okay, I'm unemployed. That's what I am, all right. Fuck that. I know — I'm 24, and I'm not going to make it. Great.' I've had a very, very forgiving and a very, very supportive mother who never really gave me a hard time for going in and out of slackerdom. I think that one of the things it really meant getting that accolade was that I was legitimately a songwriter/artist now. You can take that home to your mom."

"Prequelle" will be released on June 1 via Loma Vista Recordings. The record was tracked last year at Artery studios in Stockholm with producer Tom Dalgety (OPETH, ROYAL BLOOD) and mixed in January at Westlake Studios in West Hollywood, California with Andy Wallace (NIRVANA, SLAYER).