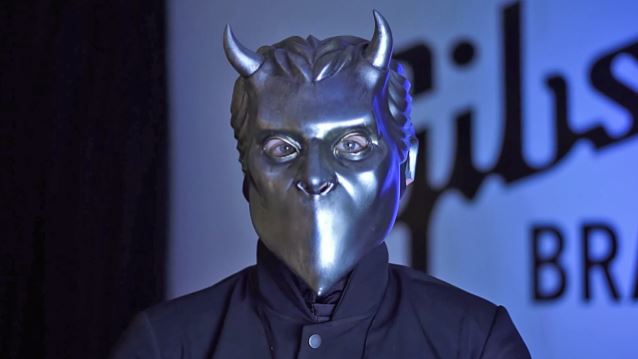 LoudTV.net recently conducted an interview with one of the Nameless Ghouls from Swedish occult rockers GHOST. You can now watch the chat below. A couple of excerpts follow (transcribed by BLABBERMOUTH.NET).

"Whereas the previous album, stylistically, was hovering in a baroque milieu, this new one is more of a futuristic, early-1900s, super-urban, modern world… but from a 1920s point of view. It's slightly more energetic. It's a little bit more to the point. I think that with the previous record, we warped our sometimes-retrospective sound, and I think we warped it a little bit too much to the retro, which didn't have too much to do with the recording; I think it was a mix and mastering thing, where it got a little bit lost. So, slightly wiser from that recording, we went into this recording, this album, with the knowledge that there were a few things that were better taken care of before than later. And one of them was, basically, to have a little bit more bite in terms of our guitar sounds and the drums to be slightly less retro."

"Obviously, it is a big problem. It's a very contemporary problem. It's a very, very big danger. And, as much as we in the Western world feel like we are secularized and that is sort of an old-fashioned… Especially in Sweden, where we come from, it's so secularized, to the point where being religious is almost like being a little bit dumb. But still, there's also… There seems to be a disconnect between the modern man and her well being, because of that loss. That is not to say… We are not telling anybody to believe anything special, but there seems to be a disregard towards the idea that there are a lot of things that we might believe that we don't understand. People right now, and there has been a thing happening for the last hundred years… I mean, you remember the saying, 'All the inventions have been invented.' And even though most people laugh at that today, there is still a feeling of that we know everything, we have reached the zenith of our civilization, this is the best that we're… we're peaking. If there's anything that I would like to, or we would like to, tell the little person is to have a higher acceptance towards the things that you do not know. The only thing that we can agree upon, at the end of the day, if you're not talking to someone who's fucking mentally disturbed, is that we don't know. We can believe, and we can want to believe, but 'This is gonna happen,' or, 'This is not gonna happen.'… 'When you die, this is gonna happen,' or, 'This is gonna happen,' or, 'That is gonna happen.' We have no idea. There's no one that can answer that question, especially not a bunch of Romans in 325."

On the recording process for "Meliora":

"The main producer, the sound producer, was a guy called Klas Åhlund. He's a Swedish producer, and he's professionally more known as more of a songwriter-producer — the sort of producer that sits, writes a song, produces it, and then this really famous singer comes in and sings it, and then it's their song. He wanted, for once, to do more of a 'normal' production job where he works with a band rather than just one artist. So… that was interesting. I definitely think that we got a lot of ideas and a lot of new angles that we wouldn't have had, had we worked with a more established rock producer."

"Meliora" will be released on August 21 via Loma Vista Recordings.