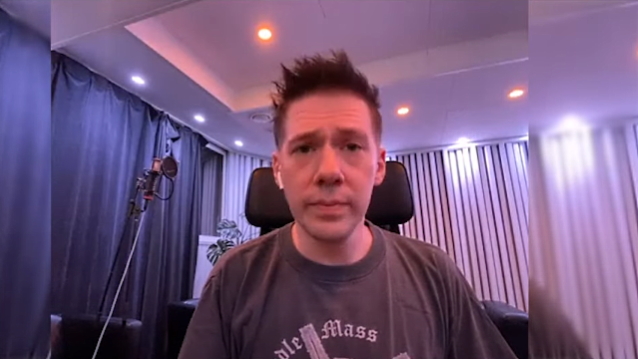 Tobias said (as transcribed by BLABBERMOUTH.NET): "With the people that I have worked with, it's very much a chemistry thing. You work well. You have fun together. Collaboration with people is not to be taken for granted. Because you can't really look at someone's resume and just, like, 'Oh, I'm gonna work well with this person.' It's like saying, 'Oh, that's a beautiful girl,' in my case then. 'If I get together with her, we will have a wonderful child.' It doesn't work like that. It's all about chemistry; it's all about building something.

"I've had meetings. I've tried to work with some people that are just, like, it doesn't work — it doesn't work," he explained. "But with Vargas & Lagola, it works really well. Every time we get into a room, we have a lot of fun. Anytime I bring an idea to them, I know we're gonna mold it into something really good. So I feel always good about working with them."

Forge worked on "Impera" with producer Klas Åhlund, who also sat behind the desk for 2015's acclaimed "Meliora" effort. Asked why he chose to end his streak of working with a different producer on each new GHOST LP, Tobias told El Paso Inc.: "The thing is you need to keep moving so that you don't get stuck in friendly comfortable mode. 'Meliora', the record I made with Klas, was really good, but the recording and the production itself left a few things to be improved. When time came to record 'Impera', the writing and demoing had been done in 2020. But in early 2021, the American producer who was supposed to make the record couldn't come because of the travel restrictions, and I couldn't go to America. And because Klas is also a very scheduled person, he had a project lined up that fell through. All of a sudden, he had a few months off, and I was, like, 'That is well-timed, because I don't have a producer. Would you like to produce the record?'"

GHOST will embark on the next North American leg of its "Imperatour" this summer. The trek will see the Grammy Award-winning Swedish theatrical rock band headlining 19 arenas across the U.S. and Canada (plus an appearance at Virginia's Blue Ridge Rock Fest),kicking off August 26 at San Diego's Pechanga Arena and running through September 23 at the Resch Center in Green Bay. Support on all dates (with the exception of Green Bay which will feature support from CARCASS, and the Blue Ridge Rock Fest) will come from Grammy Award-winning band MASTODON and SPIRITBOX.

"Impera" was released on March 11. The 12-song effort was produced by Åhlund and mixed by Andy Wallace.