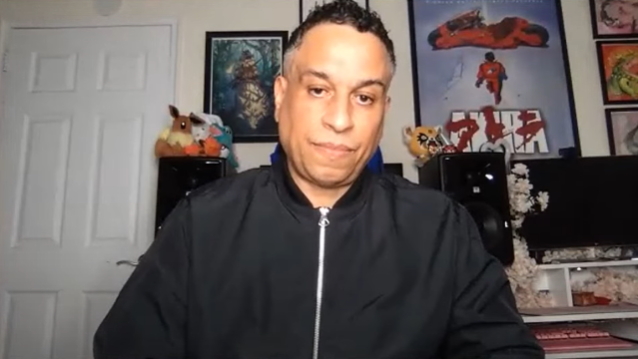 Former DEFTONES bassist Sergio Vega has opened up about his departure from the band.

The 51-year-old musician, who officially joined DEFTONES in 2009, confirmed his exit two months ago, just days after a new photo of the group without him emerged online on various digital service providers. At the time, took to social media to share a video explaining his perspective on the split. In the Instagram video, Vega detailed the contractual issues that created a rift between himself and the members of the Sacramento-based act.

Now, in a new interview with "The Jasta Show", Vega elaborated further on his role in the DEFTONES and how internal disagreements about his hired-gun position in the group to them parting ways.

"On a creative level, they were always super open and super cool," Sergio said in part (as transcribed by BLABBERMOUTH.NET). "And really, when we talk about the other end, the financial end, which is something that I get, you're Chino [Moreno, DEFTONES singer] and you have dependents, you have a lot of family, and [if] things go [to] a five-way split [from] a four-way split, it changes things and that's something that impacts your life. So the financial shift and the financial swing becomes something that's hard to reckon with. But for me, even in my position and my asks or negotiations were never speaking to that. Not that it was even possible. Being on half of the band's catalog, you're not ever going to see money from things you're not a part of. But it was never even about money. Because even the publishing was there; that's fine. It's purely about belonging; it's purely about just wanting to [feel] like you're in it."

Reflecting on the fact that he joined the DEFTONES as the replacement for the band's late bassist Chi Cheng, Sergio said: "At the beginning, I was up for anything. I was just, like, 'My friends are in trouble, and I just wanna help.' My thing was, 'Whatever you need I got.' If it was to be, 'Hey, play these bass lines. We got this thing.' I'm, like, 'Yeah. Cool.' Being a hired gun, there's no room for creative input — that's fine. That would have been a thing, and you wrap your head around that. Initially, my only goal was to put my best foot forward and be a help to people in need and people that I cared about. And it was only because of the way that it was presented to me as, 'This is how it's gonna go down,' where something that I started to go, 'Hey…'"

Vega denied that his unhappiness with position in the DEFTONES was related solely to finances. "This was a perennial thing," he explained. "This was something that would come up, 'Hey, guys.' 'Okay, cool. We're really happy with the status quo.' And it was never about money. It was always, like, 'Here's another raise.' I was, like, 'It's not about that.' And it was something that I think is a misconception, like I'm trying to bring a contractual change during a pandemic. I'm not.

"Part of this weird dynamic was that having a dual kind of role in a sense of being a core and key writer, arranger and collaborator but also being someone who's being paid on a salary created a dissonance," he said. "And not for myself, but for the whole thing. And so it'd be, like, hey, you're home and you're getting paid. But I'm, like, these are the parameters that I've been trying to change. I just wanna be in the same boat. Not about equal money or anything, but when times are good, times are good. When there's income, we can draw from it. When there's no income, you just hold on to your thing.

"It was never about money and it was never about any of that," Sergio reiterated. "It was just about literally being in the same situation so that it didn't create these opportunities for dissonance, where it was, like, 'Oh, you're doing this, but we're paying you while you're doing this.' I got a call that was, like, 'We're hemorrhaging a lot of money on storage space and you.' And I was, like, 'That's my problem. I'm compared to a storage space. I'm a line item.' It's not the money. It's just the dynamic. So it wasn't me asking for anything during the pandemic; it was the contract being canceled, which is their right. And then I was, like, 'Okay, cool. This doesn't work for anybody. We can finally address a total restructure.' But at the end of the day, we weren't able to really come to terms on that. So that's fine. Basically, everything that I had said in [my initial video] statement is what kind of happened. And I totally understand their position. But mine is I have to respect my situation and my position as well, that it wasn't something that… having that dissonance, for lack of a better word, was something that was pervasive, and it was something that ultimately was affecting me mentally as well."

Vega cut his teeth in the New York City hardcore scene in the late 1980s before going on to play in the influential post-hardcore trio QUICKSAND. QUICKSAND released two major-label albums ("Manic Compression" and "Slip") before calling it a day. Soon after, Vega found himself filling in with the DEFTONES and eventually joined the band as the full-time replacement for Cheng.

Chi died in April 2013 at the age of 42. He had been in a semi-comatose state for more than four years after being seriously injured in a car accident in November 2008.

DEFTONES recruited Fred Sablan as their new touring bassist following Vega's departure. Sablan made his live debut with the DEFTONES on April 14 at the opening concert of the band's spring 2022 U.S. tour at the Moda Center at the Rose Quarter in Portland, Oregon.