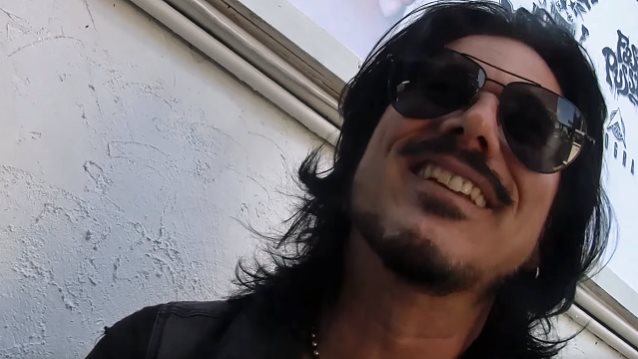 Former GUNS N' ROSES guitarist Gilby Clarke was asked by The Times Of India if he would be part of the GN'R reunion, following reports that long-estranged singer Axl Rose and guitarist Slash had recently repaired their relationship. Clarke, who was not an original member of the group, said: "Of course, it was a great band. If Slash and Duff [McKagan, bass] came back, it would be special. I would hope I could be a part of it if that ever happened."

He continued: "I had a great time during those years. We were young and didn't give a shit what anybody thought. Most people's memories are of the drama and negative shit. I remember being a part of a very powerful musical unit. Everybody cared deeply about the live shows and the music that was recorded. I enjoyed that. I really felt we were on the same page musically and were passionate about our performances."

Clarke told podcast host Eddie Trunk earlier in the month about the possibility of a reunion of GUNS N' ROSES' classic lineup: "It's strange. I mean, obviously, we've all heard [the rumors]. I actually did not know the news that Slash and Axl had talked, I didn't know, and I see him all the time. I don't know… I mean, obviously, it would be great for music if it did happen."

Clarke added that he has not heard anything about a reunion from anyone in the band and said that he didn't think a reunion would actually happen. "No, I really don't," he said. As for whether he might be asked to participate, Clarke said: "I think if it happened, obviously, it would be great, but I've got to be realistic. The fans want the original five guys, and I do too. It was a great band, [and] it would be great to see that. If it did happen, I would definitely be available to do it."