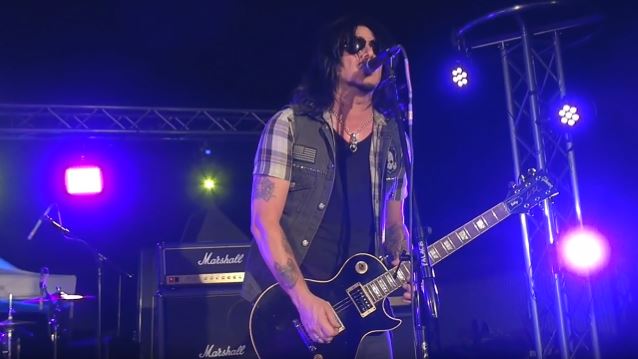 GILBY CLARKE On GUNS N' ROSES' 'Not In This Lifetime' Tour: 'I Don't Know If You Can Really Call It A Reunion'

During a brand new interview conducted this past Saturday (August 20) at the first annual Pistons & Pin-Ups Car Show N' Concert in Chatsworth, California, former GUNS N' ROSES guitarist Gilby Clarke was once again asked for his thoughts on the reunion of long-estranged GN'R singer Axl Rose and guitarist Slash for the "Not In This Lifetime" tour, which kicked off in April and is scheduled to last at least through next year. Clarke, who was not an original member of the group, said (see video below): "The reunion that happened is really just Axl, Slash and Duff [McKagan, bass]. Basically, Slash and Duff have joined Axl's band. So I don't know if you can really call it a reunion. So, myself, Matt [Sorum, former GUNS N' ROSES drummer], Izzy [Stradlin, former GUNS N' ROSES guitarist]… it didn't happen as a reunion for all of us to join. So I think if the time was right and the situation was right, I think everybody would come back and do it."

He continued: "Look, first of all, everybody gets along great and stuff; it's great music; GUNS N' ROSES is a great band and has a great legacy. I think everybody just wants to see it done right. And when it's time, we'll do it."

"It has been a long time since I've put out a Gilby Clarke solo record," Gilby said on Saturday. "So I just thought it was time. It had nothing to do with GUNS N' ROSES. It was just... I noticed when I've been talking to people out on the road that I haven't made a record in a long time. So it's time. And I finally have a good collection of songs that I really like, and I think they should be out. So I'm working on that. Hopefully the end of the year is my goal to get it out, by around Christmas time. So let's see what we can do. I hope it works out."