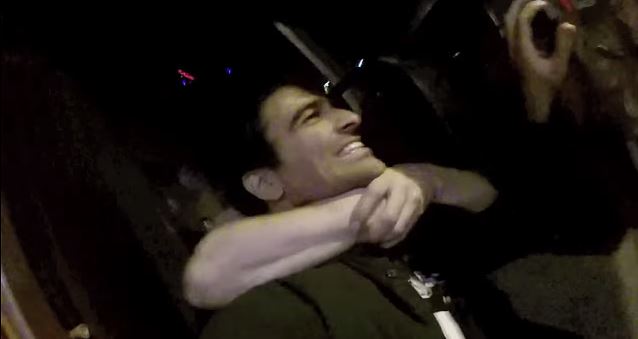 According to TMZ.com, Navid Farsi, who made headlines in May when he caked Adam Levine with powdered sugar as the MAROON 5 frontman made his way out of "Jimmy Kimmel Live!", was put in a headlock by Glenn Danzig after the former MISFITS and SAMHAIN singer's concert in Pomona, California last weekend.

Danzig, who reportedly has a strict "no photos, no videos" rule at his shows, apparently took notice of Farsi when the fan started taking pictures of Glenn during the concert, resulting in Danzig snatching Navid's phone. After the show, the attention-thirsty fan tried to get on Danzig's bus with a camera, which led to Glenn putting the fan in a headlock while telling the fan that he was "being an asshole."

Video footage of the incident can be seen below.

Farsi, 28, was arrested in May on suspicion of battery for striking Levine and others with a bag of powdered sugar.

Video footage and photos showed someone throwing the bag of powdered sugar in Levine's face after the singer's appearance on "Kimmel".

Back in June 2012, Glenn Danzig was physically held back by security from attacking photographers at the Bonnaroo festival after the rocker took issue with the fact that four photographers were taking pictures of his band's performance at the event.