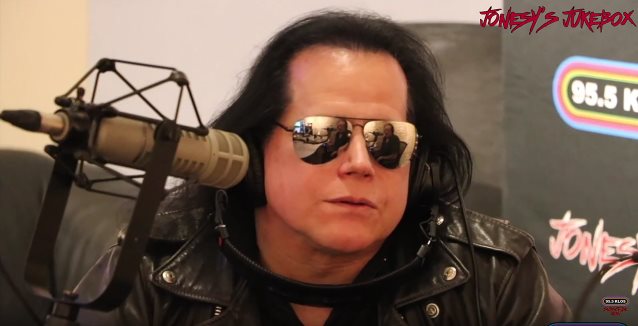 Glenn Danzig has suggested that at least some of the major California wildfires in the last several years may have been acts of terrorism.

A recent study found that 84 percent of U.S. wildfires and 97 percent of wildfires in coastal California and the Central Valley were started by people.

In California's Mediterranean climate region, 89 percent of the total 5,921,861 acres burned was caused by human-started wildfires.

During an appearance on yesterday's (Monday, March 27) edition of SEX PISTOLS guitarist Steve Jones's radio show, "Jonesy's Jukebox", on the 95.5 KLOS station in Los Angeles, Danzig stated about California's destructive blazes: "I have a theory about fires in California: terrorism. It's maximum amount of carnage for the littlest amount of money: a match and a can of gas. And you go out and [find] a brush and boom! It doesn't cost a lot of money [and] it's done. That's really what it's about, right?

"If you're gonna outlaw guns, some guy just decides he's gonna plow a giant truck into a ton of people in France and kills way more people," he continued.

"If somebody wants to do something terrible like that, they're gonna do it."

Asked if he thinks that's always been the way of humans — to have a percentage of people who are just not happy campers and want to cause havoc, Danzig said: "They just wanna F shit up, right? Yeah, of course, there's always gonna be people that aren't happy with something. It's just a matter of whether they're gonna go to an extreme to do it."

According to the University Of Colorado At Boulder, the U.S. has experienced some of its largest wildfires on record over the past decade, especially in the western half of the country. The duration and intensity of future wildfire seasons is a point of national concern given the potentially severe impact on agriculture, ecosystems, recreation and other economic sectors, as well as the high cost of extinguishing blazes.

The annual cost of fighting wildfires in the U.S. has exceeded $2 billion in recent years.

As previously reported, DANZIG and MINISTRY will perform at this year's edition of the "Blackest Of The Black" festival, set to take place May 26-27 at Oak Canyon Park in Silverado, California. The two-day event will feature over 20 artists, with DANZIG serving as headliner on May 27.