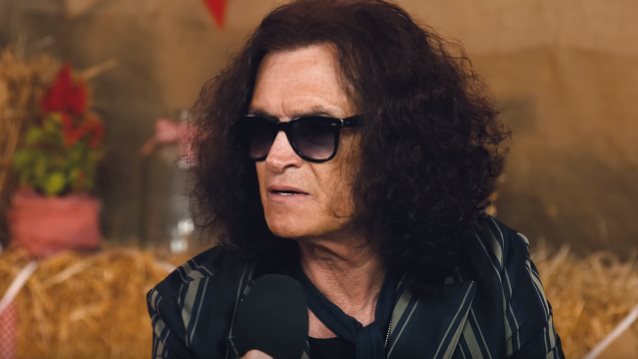 In a brand new interview with Metal Talk, Glenn Hughes was asked about his former DEEP PURPLE bandmate Ritchie Blackmore, who recently played a series of European shows to mark his return to the rock stage.

Acknowledging that he has seen some YouTube clips of the revamped RAINBOW, Hughes said: "All I have to say about Ritchie is that he's seventy-two now. If I'm lucky, I'll get to be seventy-two.

"Ritchie is an oddball, in all the respect," he continued. "I only wanna wish him a happy life.

"He talks about not being happy, he wants to be angry or whatever he wants to do… Whatever he does in his life, he's a strange dude, but I just wanna wish him only the very, very best," Glenn added. "I had a great time working with him, and I hope he continues forever."

Hughes said earlier in the year that he thought Romero was doing well recreating the classic songs from RAINBOW's and DEEP PURPLE's catalogs. "Singing Ronnie's [James Dio] songs needs a special kind of singer and I think the young chap did a reasonably good job and I think Ritchie may well have found the guy for him. He was certainly a good fit for RAINBOW."

Hughes told Hardrock Haven last year that Blackmore originally asked him to be part of the RAINBOW comeback but that he declined. "I said no because [Ritchie] wanted to, funny enough, he wanted to use an unknown singer, and I said, 'It's not me. It's not me to do that,'" he explained. "I very eloquently said, 'No, thank you. I really would like to see you, but I can't do this at the point where I am right now.'"