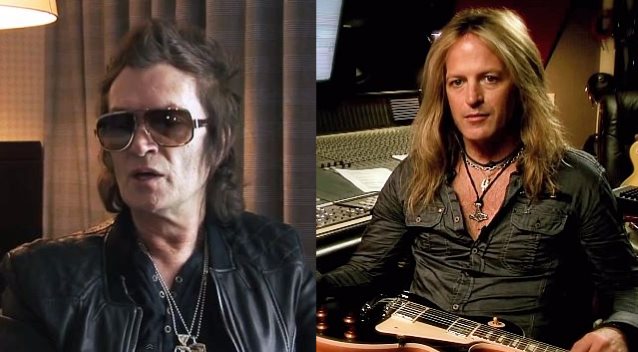 Commenting on the addition of Doug Aldrich to his band, Hughes says: "My friendship with Doug started when he was playing with my dear friend, Ronnie Dio. Ronnie would always introduce me to his bandmates who were always family. So, on a fateful night in May 2010, I was playing at a festival in Bologna, Italy. I asked Doug if he would like to join me to play a couple of DEEP PURPLE songs. We went into my dressing room and went over the arrangements of the songs, and we were good to go. I introduced Doug to the stage, and we performed for the audience. It felt natural and full of energy.

"Doug is a world-class guitar player and bona fide rock star. I was impressed with Doug's demeanor, both on and off the stage. [He is] hard-working, kind and loving, all the qualities that one needs to fulfill a fruitful life.

"Our friendship continued as Doug joined WHITESNAKE, and I was happy knowing that my brother David Coverdale, would nurture Doug's talent, and give him the love to share with ROCK fans globally.

He continues: "On the fifth anniversary of Ronnie's passing, I connected with Doug again, and we chose to talk and remember how much we loved and missed him. We both asked what we were doing musically, and then out of the blue I asked him if he would like to come and play with me and do some shows. The answer was... 'I'm in!'

"We are both very excited to bring the love to ROCK fans, and carry the message that ROCK is alive. For me, it's time to get back onstage, it's where I belong... see you soon!"

Excited at joining Hughes' band for the 2015 tour, Doug Aldrich says: "Glenn and I have been friends for years. I met him through the DIO camp as we were both very close to Ronnie. We had played live together several times, first in Bologna, Italy for the Ultimate Guitar Festival, and most recently at the Jim Marshall 50-year memorial concert at Wembley Arena in London. I've had a huge respect for what he has accomplished, but to play with him was astonishingly cool. So cut to a few days ago. I was remembering Ronnie James Dio on the anniversary of his passing and posted on my Facebook page about that night five years earlier in Bologna. I remember Glenn dedicating 'Long Live Rock 'N' Roll' to Ronnie. It was right out of the blue and little did we know RJD would pass the next day. Glenn and I were both pallbearers at the funeral. Glenn heard about the Facebook post and gave me a call, also asking if I was up for a little jamming... I said YES, for sure I was!! We both agreed, it was long overdue to do a run of dates together. Glenn had dates and I signed on! I'm very excited about it all. If you hear of Glenn in town... GO see him 'cause I'll be there too!!"

The set will showcase highlights from Glenn's colorful career: TRAPEZE, DEEP PURPLE, BLACK COUNTRY COMMUNION, CALIFORNIA BREED, along with his own solo material.

Says Hughes: "After being studio bound for the past few months and then touring with CALIFORNIA BREED late last year, where I received the most incredible live audience reaction to my appearances while out with ALTER BRIDGE and SLASH, I felt it long overdue for a solo tour of my own. I'm looking forward to hitting the road with a brand new solo band and reaching out to as many fans as possible. It's a real pleasure for me to be coming back to perform live."

Support on the tour will come from Jared James Nichols, who recently released his debut EP, "Old Glory & The Wild Revival".