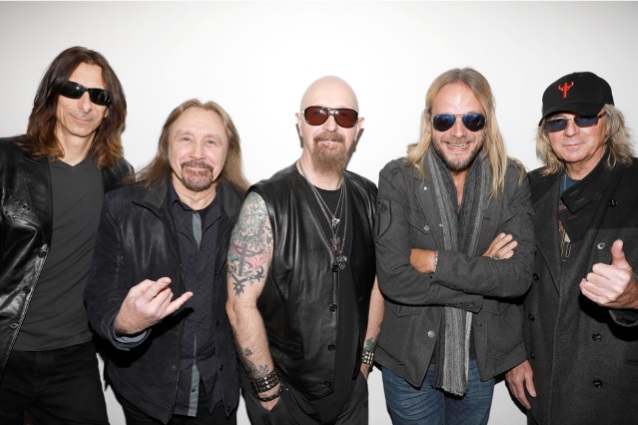 GLENN TIPTON On His Future Role With JUDAS PRIEST: 'It's A Question That I Can't Really Answer'

JUDAS PRIEST guitarist Glenn Tipton says that he doesn't really know what his role in the band will be now that he has stepped back from performing after being diagnosed with the later stages of Parkinson's disease.

Asked how he sees his role in PRIEST going forward, Tipton told SiriusXM Volume host David Fricke (see video below): "It's a question that I can't really answer. I'm gonna see how things go. Medication is improving. Each day is different for me — some days, it's worse; some days, it's better. But I didn't wanna compromise the best heavy metal band in the world. So, to be on the safe side, Andy is in there now, and what will be will be. And that's all I can say. But I love this band; it's been my life. And maybe I'll do some more writing and recording — maybe even some more touring. It's an unanswerable question, really. It's in the lap of the metal gods."

PRIEST singer Rob Halford takes a pragmatic approach to how Tipton's diagnosis has changed the guitarist's life, including the way it has affected the band's touring activities. "You've gotta be a fighter," Rob said. "It takes me forever to get out of bed. My fucking back! But you do. You do whatever you've got to do. It's like anything in life. When you have the thrill and the pleasure to do something that means so much, you'll do whatever you've gotta do to get to that next gig and play that next song. You don't really think about it. And Glenn was humble enough to say, with the challenges that he's going through, he says there are people that are in a much more difficult place than where Glenn is. And that's just the right philosophy to have. There's always someone that's dealing with a bigger challenge than you are. You've gotta have perspective. You've gotta find the balance and the harmony."

Added PRIEST guitarist Richie Faulkner: "And what a beacon of hope. If anyone's going through anything, if you look at people like Glenn, like Tony [Iommi, BLACK SABBATH guitarist, who was diagnosed with cancer in late 2011], if you're thinking, 'I don't wanna get in a van,' or, 'It's too cold,' and you look at these guys, 50 years later, doing what they're doing with the challenges they're facing, it separates the men from the boys. So hats off to 'em — they're heroes."

Rob concurred, telling Fricke: "We were with Lemmy [MOTÖRHEAD] just a few weeks before he passed. Ronnie [James Dio] was singing almost till the end. It's just a beautiful thing that it makes you think about. Again, it puts things into perspective."