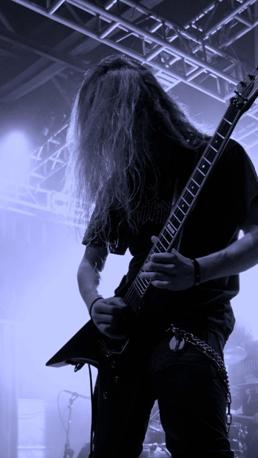 After over a decade with the band, guitarist Juho Matikainen has decided to part ways with Finnish black metallers GLORIA MORTI.

Commented the band: "Matikainen wants to concentrate fully on his studies and career and is left with not enough time to give his 100% to the band. The departure happens in good spirits and the band wishes to thank Matikainen for the great years on the road.

"The guitarist vacancy will be filled with our good friend and an outstanding guitarist Eero Silvonen (CASKET, FINAL HARVEST, ROUTASIELU, DEATH CONFRONTING). The band is really excited to have him on-board and wishes to welcome Eero to the twisted family known as GLORIA MORTI.

GLORIA MORTI's third album, "Anthems Of Annihilation", was released in 2010 via Cyclone Empire Records. Recorded and mixed at guitarist Juho Räihä's personal studio and mastered at Chartmakers by Svante Forsbäck (RAMMSTEIN, SOULFLY),the CD "easily exceeds the band's earlier work," according to a press release. "[It] brings the band to new heights by its agressive yet diverse soundscape."