Dutch melodic death metal band GOD DETHRONED has posted a new song, "Under a Darkening Sky", on the group's MySpace page. The track comes off GOD DETHRONED's new album, "Passiondale", which will be released as a limited double digipack edition including a bonus CD. The double-digipack will feature stunning artwork and two discs: the regular album plus a live recording from 2005 featuring nine songs!

"Passiondale" will also be released on vinyl, limited to 666 copies.

The album will be issued on April 24 in Germany, Austria, Switzerland and Italy and April 27 in the rest of Europe via Metal Blade Records.

The CD was recorded at Soundlodge studios in Germany with producer Jörg Uken.

GOD DETHRONED frontman Henri Sattler explains the lyrical concept of "Passiondale": "It says Passendale on the street sign. The little village with its huge Tyne Cot cemetery and memorial centre. I passed it many times on the way to Isaac (Delahaye, our former guitar player) for another of our notorious drinking sessions in Ypres not far from the French border. I got really impressed by how this town breathes World War I. The numerous cemeteries, the Menin Gate with its daily last post ceremony since 1929 with the exception of just one day during a bombardment in World War II, the buildings that have been rebuilt in their original state and definitely all the English, Irish and Scottish people that visit Ypres every weekend, probably because one of their relatives died there during the war. During the night at the bars and pubs, they tended to get really drunk and sang louder than the barman could crank up the stereo set! It's during these times that I got inspired by the Great War and decided to write a concept album about it. Ypres and Passendale were the center of war activities during the war with around 900,000 casualties compared to nine million worldwide. I realized how harsh it must have been there during those four years. Passchendaele was the official name of the little village during the war, but since the English speaking armies couldn't pronounce that, they nicknamed it to: Passiondale"

GOD DETHRONED's last album, "The Toxic Touch", was released in the U.S. in November 2006 via Metal Blade Records. The CD was recorded at Soundlodge Studios in Germany with producer Joerg Uken. Mastering was handled at Wisseloord Studios in Holland. 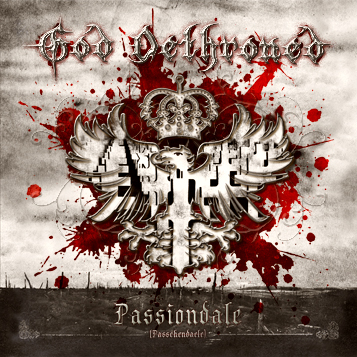