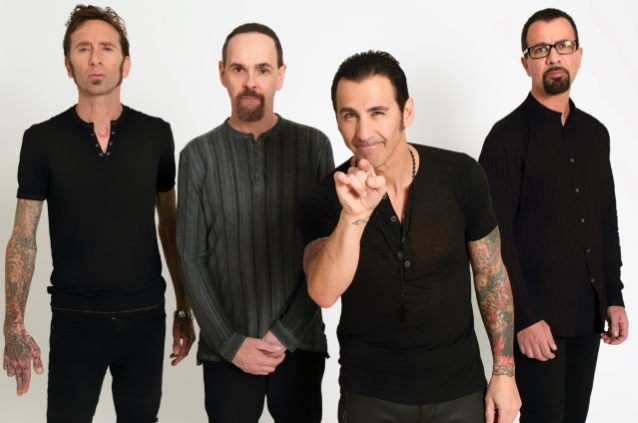 GODSMACK frontman Sully Erna was interviewed by Terrie Carr for the latest edition of "Box Of Rock" on WDHA-FM 105.5 FM, the rock music station licensed to Dover and Morristown, New Jersey. You can now watch the chat below.

Asked how he felt the first time he listened to a completed version of GODSMACK's latest album, "When Legends Rise", Sully said: "It was right around that time that I started to realize that I felt we had something a little bit more special than we had done in the past. 'Cause I was so deep into writing the whole year and recording and tweaking things, I hadn't really had the opportunity to step back and listen to it as a listener, as a fan of music. And when I finally did, I started to realize that there's definitely some strong songs on here that I think are gonna really resonate with the people and not alienate the core audience, but hopefully even expand us into a bigger audience."

Erna also talked about GODSMACK's decision to release "Bulletproof" as the first single from "When Legends Rise". He said: "It just felt like the right song. It seemed to have every element of the song that shapes a hit song to be a hit song — something that truly resonates with people and is memorable. And it was just one of those choruses that I felt was a bit undeniable — you heard it once and you get it, it's a no-brainer and you're singing it for the rest of the day. And when a song speaks to me that way, I feel the right move is to release that. And not only that — but it had a little bit more of a melodic factor to it. It wasn't that typical really gritty, tough, edgy song that GODSMACK's used to delivering for the first single. We wanted to open up some new doors, so we felt like maybe we kick the door open with this one and then we'll figure out how to walk through it."

"When Legends Rise" was released on April 27. The disc follows up 2014's "1000hp" and is the band's first release through BMG after splitting with its longtime home, Republic/Universal.

GODSMACK and SHINEDOWN recently unveiled a second North American leg to their co-headlining tour, adding a string of fall dates to the two bands' itineraries after initially hitting the road together in July. The new dates begin on September 21 in Greenville, South Carolina, ending on October 11 in Portland, Oregon. ASKING ALEXANDRIA will take over in the opening slot for LIKE A STORM and RED SUN RISING, who were splitting the summer concerts.