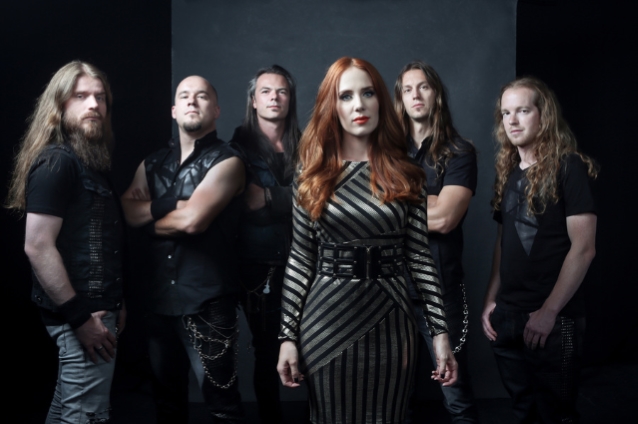 EPICA To Enter Studio At The End Of 2019

Dutch symphonic metallers EPICA recently announced that they are working on their first-ever book, "The Essence Of Epica". This unique book will tell the story of the remarkable musical journey of EPICA in the bandmembers' own words, and is illustrated throughout with rare, candid and classic photographs.

Speaking to Metal Wani, EPICA guitarist Mark Jansen stated about the band's plans for the coming months (hear audio below): "At this moment, we are very busy with the book, so I'm also collecting old pictures that I find on my old computers. And I'm also collecting old things that I find, what can be interesting for the book. And besides that, I wrote one song already for a future EPICA release. But we will have a lot of time now, because we will probably hit the studio at the end of 2019, so there's plenty of time to write new stuff. And that's also intentionally like this, that we don't rush it too much this time."

"The Essence Of Epica" will contain first-person testimony from Mark Jansen (vocals, guitars),Coen Janssen (keyboards),Simone Simons (lead vocals),Ariën Van Weesenbeek (drums),Isaac Delahaye (guitar) and Rob Van Der Loo (bass) along with that of former members, friends and colleagues of the band. The story of EPICA's rise from Dutch newcomers to international symphonic metal giants is described in majestic and mesmerizing style in this official, exclusive book.

Also in the works is EPICA's unique collaboration with the Metropole Orkest. The Metropole Orkest is a world-renowned Dutch orchestra which has performed and/or recorded with the world biggest superstars such as Sting, Bono and Brian Eno.

EPICA VS METROPOLE ORKEST "Beyond The Matrix - The Battle" will be released as a limited-edition vinyl and digital download on October 26 through Nuclear Blast.

EPICA's "Attack On Titan" EP was made available outside of Japan on July 20 via Nuclear Blast Records. The release features metal versions of the theme songs from the highly successful manga-series-turned-worldwide-aired anime "Attack On Titan".