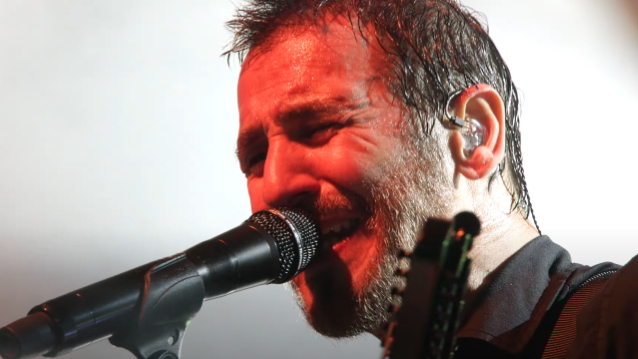 GODSMACK's music video for the song "Surrender" can be seen below. The track is taken from the band's new album, "Lighting Up The Sky", which will arrive on February 24, 2023 via BMG.

Co-produced by vocalist/guitarist Sully Erna and Andrew "Mudrock" Murdock (AVENGED SEVENFOLD, ALICE COOPER),"Lighting Up The Sky" is a testament to powerful storytelling.

"I like when a record takes you on a journey from front to back. I realized there's a whole story here about one man's journey, the ups, and downs," says Erna. "I believe it's a story everyone will connect to, on a human level, because we've all gone through things in life." The album explores boy-meets-girl, obstacles in relationships, the polarized political climate and the state of the world, betrayal, connection, rebounds, and more. It also gets into the idea of legacy, what we leave behind; fitting for what Erna has noted as GODSMACK's final studio album.

"Lighting Up The Sky" track listing:

In a recent interview with Pablo of the Minneapolis, Minnesota radio station 93X, Erna spoke about the fact that "Lighting Up The Sky" will likely be GODSMACK's final collection of original material. He explained: "It's the most important record, I think, we've ever written and recorded.

According to Erna, GODSMACK plans to hit the road after the release of "Lighting Up The Sky" and never stop. "That's forever now. It's forever now," he said. "From the point we start touring, we will always tour. We may take some breaks here and there, but we're now gonna start setting up the greatest-hits show, because we feel like we're able to do that. We can now play the best of the best that the fans have identified as what they've enjoyed the most over the years and why these songs became hit singles."

"Surrender", which arrived in September, marked the first release from GODSMACK in four years, following their globally acclaimed and gold-certified 2018 album "When Legends Rise", which earned the Erna-fronted outfit a No. 1 spot across U.S. Hard Rock, Rock, and Alternative album charts.