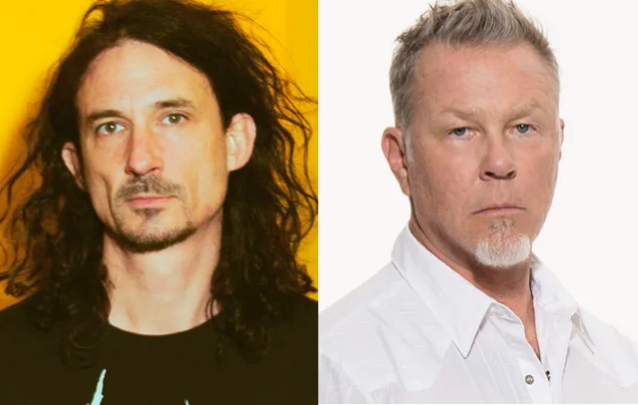 In a new interview with Sweden's RockSverige, GOJIRA frontman Joseph Duplantier was asked which other musician influenced him and made him want to become a guitar player when he was growing up. He responded: "James Hetfield. I know, it's surprising. [Laughs] No, it's not surprising, because I've been talking about him. Surprising because James is more a band leader and a singer and nobody thinks of James Hetfield as a guitar player. Some people do, but I really put it up there. I'm not talking about solos.

"I'm not a shredder," he continued. "I don't shred. I create platforms for songs with rhythm guitars and subtleties within them. If I'm going to talk about a guy who does solos, and it's not original, but Dimebag [Darrell Abbott, late PANTERA guitarist]. Dimebag is up there when it comes to shredding and when it comes to breaking the rules, and when it comes to fucking playing the guitar like a bird is flying, that would be Dimebag for me. His solos are absolutely breathtaking, but James Hefield has something… if there was a school, he would be my teacher. If there was a school for rock, he would be my teacher. I want to follow his course. His right hand is a hammer, an unstoppable hammer. He's the foundation of the rhythmic section in METALLICA. I think Lars [Ulrich, METALLICA drummer] is just dancing around James's guitar. Everybody follows James.

"One time we were on tour with [METALLICA], we became friends with their monitor engineer because he was doing our monitors too; we hired him," Duplantier added. "We gave him like $100 in cash every day, 'Can you do our monitors? We don't have our own monitor guy.' And he was, like, 'I got you.' Then when METALLICA played, one time he gave me James's spare in-ears. This little box, a receiver. He said, 'Joe, come here,' because he saw me watching James and analyzing his fucking right hand. It's out of this world. It's not necessarily impressive on a technical level. It's the precision and the consistency and it's sharp. He gives me a little radio there and I plug it in, I have my own in ears and I'm, like, 'Oh my god, oh my god! This is James's fucking monitors! What?' I plug them in and put it in my pocket and look at him, and I was amazed to see that there was almost no drums in there. Who does that? What? Maybe there was some hi-hat, but he was flying through the songs, playing and singing and it was only him in his monitors. A little bit of drums to stay connected to the rest, but some people need a lot of drums because they're so chaotic and are just sitting on the drums, like in my case for example. This guy can do a whole show, and I'm pretty sure everybody's following him, even Lars. I think Lars follows James when he plays."

GOJIRA will release its new album, "Fortitude", on April 30 via Roadrunner Records. Recorded and produced by Joseph Duplantier at Silver Cord Studio — GOJIRA's Ridgewood, Queens, New York headquarters — and mixed by Andy Wallace (NIRVANA, RAGE AGAINST THE MACHINE),it is a collection of songs urging humanity to imagine a new world — and then make it happen. The band initially laid the foundation for "Fortitude" last year with the surprise release of the 2020 single "Another World". NPR hailed the track as "an apocalyptic banger," and Stereogum declared, "GOJIRA are one of this century's most important underground metal institutions," while "Fortitude" was Voted by fans as the #1 release on Revolver's "Most Anticipated Albums of 2021."