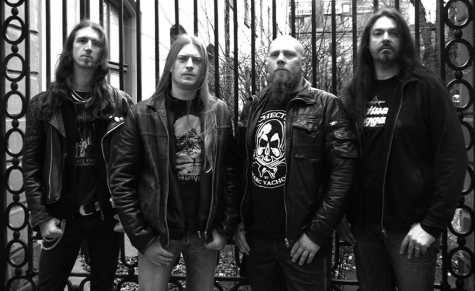 Legendary Swedish death metallers GRAVE will release their new album, "Endless Procession Of Souls", on August 27 in Europe and on August 28 in North America via Century Media Records. The band recorded 12 songs — nine new tracks plus three "very special" cuts — at their own Studio Soulless for the CD, which was previously described by GRAVE guitarist/vocalist Ola Lindgren: "a mix of our latest two releases with some more old-school, groovy 'Soulless' parts."

According to a press release, "Endless Procession Of Souls" "promises to be yet another death metal masterpiece in GRAVE's revered catalog, featuring nine tracks of uncompromising no-bullshit death metal, flawlessly executed by the sole survivors of the real legendary Swedish Dödsmetal scene. 'Endless Procession Of Souls' combines the brutality of GRAVE's last two studio albums with the groove of 'Soulless' and — of corpse — a lethal dose of 'Into The Grave' darkness."

In support of this upcoming release, GRAVE will tour North America with MORBID ANGEL and DARK FUNERAL this September/October.

Commented Lindgren, "GRAVE will return to North America in September, sharing the madness with our comrades in MORBID ANGEL and DARK FUNERAL.

"After the successful 'Into The Grave' sets we did in September last year, it will be very exciting to come back to promote the new album, 'Endless Procession Of Souls'. This killer bill is in extremo deluxe and will show you what brutality is all about...Beware the Winds of Chains!"

GRAVE's current lineup is as follows:

GRAVE's November 12, 2011 concert at Club Distortion/Kulturhuset in Stockholm, Sweden was filmed for future release. The band celebrated the 20th anniversary of its classic 1991 debut album, "Into The Grave", by performing the LP in its entirety, along with "another handful classic tunes."