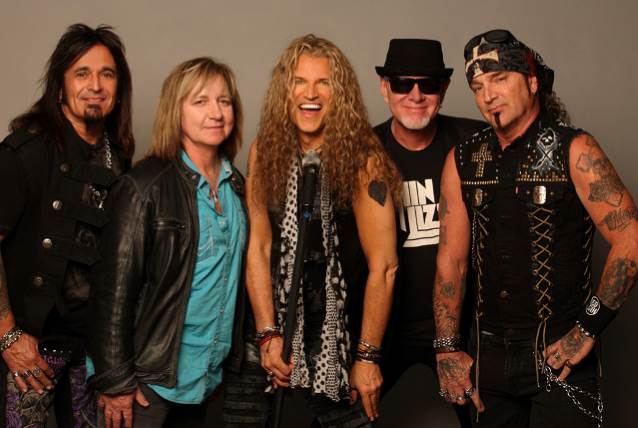 GREAT WHITE Drummer Rules Out Reunion With JACK RUSSELL: 'I Couldn't Imagine Someone In His Condition Doing What We're Doing'

"Some things don't work out business-wise, so we had to part ways with Terry," Audie said. "There were differences of opinions, personality clashes. Certain things just don't work out after time and you just have to move on. It's one of those things that sadly has to happen in the music world. I actually got along with Terry well. He's a great singer. But Mitch is great, too, and we look forward to working with him."

Asked if fan grumblings about Terry's delivery of the classic GREAT WHITE songs played a part in the band's desire to get a new vocalist, Audie said: "The fans are very used to hearing [original singer] Jack Russell's voice in GREAT WHITE. It's very identifiable. With Terry, we could have gotten a Jack clone, but we didn't. Terry fit the criteria of the music direction that we were going in very well. But some people thought we were actually trying to pass him off as Jack, which wasn't our intention at all. It's really hard after someone plays in the band for so long. You try to do the best interpretation of the phrasing of GREAT WHITE. After a while, when you start to add your own style to it, it starts to stray away from what people want to hear."

Desbrow went on to say that about "half the fans" had a problem accepting the Ilous-fronted version of the band as GREAT WHITE. "You've gotta stay true to what people are familiar with," he said. "You can't turn these songs into reggae or jazz songs. [Laughs]

"I'm sure Terry will have no problem finding work," he continued. "The whole time he was in the band he was getting offers from everyone from George Lynch to DIO DISCIPLES and different people who were, like, 'Hey, we'd love to have you if you ever leave GREAT WHITE.'"

Asked if there was any thought about reuniting with Russell once a decision was made to part ways with Terry, Audie said: "Not at all. We've already moved on from that. We've gone through a lot of stuff with that over the years, and the fact that he sued us in federal court for the name, and we spent a lot of time and money, you just don't return from that. People tell me that they've seen his latest shows, and it's just hard to look at because his health isn't as good as it could be. We've got a really grueling schedule, and it's hard enough for me, and I'm semi-healthy. [Laughs] I couldn't imagine someone in his condition doing what we're doing. We did shows with him toward the end, and he was in and out of a wheelchair and crutches, had to be carried up stairs, was falling asleep onstage. It just got old. It's a business, and we have families to support and mortgages to pay. You can't go to work messed up 24/7 and still be able to work there."

Ilous — who fronted GREAT WHITE for eight years, recording two albums with the band along the way — claimed last month that he learned of his firing "through and e-mail and the Internet." Russell called the move "deceitful" and "despicable."

Russell sued his onetime bandmates in 2012 over their continued use of the GREAT WHITE name after the singer had taken a leave of absence from the band for medical reasons. A short time later, Russell was countersued by guitarist Mark Kendall, keyboardist/guitarist Michael Lardie and Desbrow, claiming the vocalist's self-destructive behavior was damaging the GREAT WHITE name (they also alleged he was charging promoters less for his own touring version of GREAT WHITE). The parties settled in July 2013 without going to trial, with Russell now performing with a new lineup as JACK RUSSELL'S GREAT WHITE while the others are continuing as GREAT WHITE.