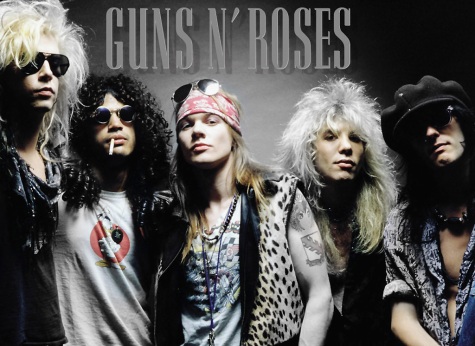 According to Rolling Stone, GREEN DAY will deliver GUNS N' ROSES' induction speech when the legendary California rockers are inducted into the Rock And Roll Hall Of Fame on April 14 in Cleveland, Ohio.

"Use Your Illusion"-era GUNS N' ROSES drummer Matt Sorum has told VH1 Radio Network's Dave Basner that founding guitarist Izzy Stradlin will not be attending the ceremony. Sorum said, "[Slash] spoke to Izzy and Izzy wasn't planning on coming. So I think that was like, if Izzy's not going to come and it's not all the original guys, then it doesn't make sense."

Slash, who recently confirmed that the original band would not be playing, told Rolling Stone on Monday (April 2) that he's "dead sick" of talking about the induction, adding, "I feel you're totally obligated to be present and I would love to play, but it's just something that's not gonna happen for whatever reason."

It's been widely documented that singer Axl Rose's hostility toward Slash is the major stumbling block for any reunion, with Slash saying, "He hates my guts. It's over a lot of different stuff; I don't even know. There's just no communication between us. I talk to Duff [McKagan, bassist] and Steven [Adler, drummer], but when it comes to old GUNS N' ROSES, there really isn't anybody that makes decisions."

Slash will release his second solo album, "Apocalyptic Love", on May 22, with a North American tour booked.

Also going into the Rock And Roll Hall Of Fame on April 14 are the BEASTIE BOYS, the RED HOT CHILI PEPPERS, the FACES/SMALL FACES, Donovan and Laura Nyro.

The ceremony will be taped for broadcast by HBO, which plans to air it in early May.