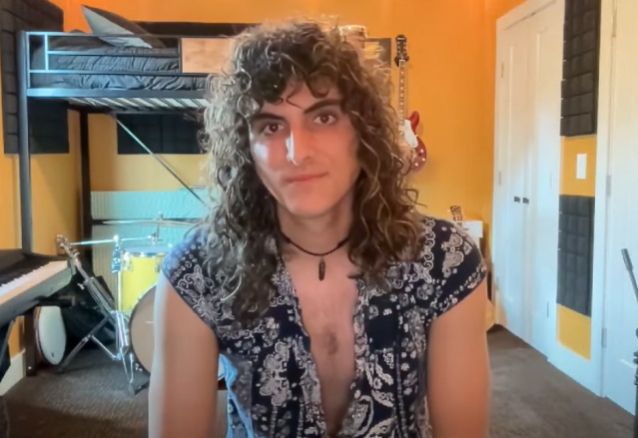 GRETA VAN FLEET Drummer On Opening For METALLICA: 'They Treated Us So Well'

GRETA VAN FLEET drummer Danny Wagner spoke to AXS TV's "At Home And Social" about what it has been like for him and his bandmates to open for METALLICA for several stadium shows in the U.S. this year. He said (as transcribed by BLABBERMOUTH.NET): "METALLICA was a big part of our lives. Growing up, that was... They are the biggest rock band in the world. And that's a statement I'm more than willing to make. But when we got that call [letting us know we would support METALLICA], there really weren't a whole lot of words. We kind of just looked at each other and went, 'Really? Us?' And we're honored. And they're such nice guys — they really are. They welcomed us, and they're an excellent role model for being the headline artist bringing on a younger group. They really just were so humble and treated us so well and our crew so well. And everything was just smooth sailing."

Back in March, GRETA VAN FLEET announced new arena shows for this summer and fall. The band is being joined by a host of acclaimed artists on the trek, including THE PRETTY RECKLESS, HOUNDMOUTH, DURAND JONES & THE INDICATIONS, FRUIT BATS, Robert Finley, CROWN LANDS and Hannah Wicklund.

The current run of shows comes five months after Jake Kiszka, GRETA VAN FLEET's guitarist, had to be hospitalized while he was battling with pneumonia.

"He pretty much, overnight, came down with a really bad case [of pneumonia]. It was really scary at the time," Wagner told the Des Moines Register. "Jake's healthy again, which is great. We're all healthy again at the moment."

Wagner also told the Des Moines Register that he and his bandmates have been staying creative over the course of the last few months.

"We have been spending the last six months or so curating a new album, and it's been going really well," he said. "It's nearing completion which is wonderful, and that's kind of new information for people. Keep your eyes peeled; that should be on the way soon."