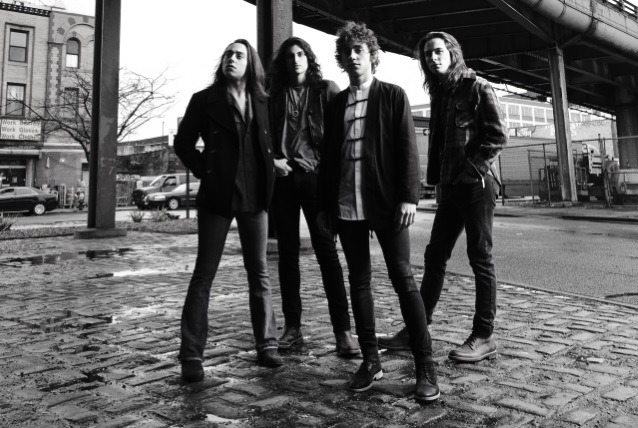 The members of GRETA VAN FLEET have told FaceCulture in a new interview that LED ZEPPELIN was not a major influence on the group despite close similarities between the two bands' styles. Guitarist Jake Kiszka explained (see video below): "I think that we've become more conscious of it, because I don't think before we ever really realized, in a lot of senses, the similarities or the commonalities that we share with that group. It's being said over and over, and I think it's one of the greatest compliments that could ever be given to a young band like ourselves. They're arguably one of the greatest rock bands of all time, so that is humbling and inspiring and honorable, in that sense. But I think that we've become more conscious of the similarities, because it's been said, and I think we've taken some time to go back and almost identify with it. 'Oh, it's interesting, because there is a lot of those commonalities.' Even if it exactly wasn't an overwhelming influence of ours, it still was influential and we can certainly see it. But overall, it doesn't really affect the writing of our music."

Kiszka told The Pulse Of Radio not long ago about the band's main influences: "Blues is that glue that bonds us, you know. I'm a guitarist, so I have to have influences from people like Eric Clapton, Jeff Beck and Hendrix — he's another good one — yeah, like, a lot of the British blues players and even the American blues players like Elmore James. And yeah, so, a lot of blues for me — well, for all of us."

GRETA VAN FLEET's first full-length album is tentatively due later this year. Jake told Loudwire: "We're in the mixing process, so it's going to be quite soon. We're wrapping it up, so we're hoping to release that absolutely this year."

Bassist Sam Kiszka added: "We had all these songs we wrote three to five years ago that we were just going to put on the album. It very quickly became all new material, so I'd say about three-quarters of the songs are songs we wrote in the studio. It just happened very quickly, we got everything done in two weeks."

GRETA VAN FLEET played in Michigan clubs for six years before rocketing to the top of the rock radio charts last year with "Highway Tune". The track is taken from the "Black Smoke Rising" EP. Their latest single is the title track.

Back in March, Elton John invited GRETA VAN FLEET to perform at his annual Oscars party for the Elton John AIDS Foundation. At the time, he called GRETA VAN FLEET the best rock band he's heard in decades. "They blew me away," he said before introducing the band. "So you're gonna see them here and they're going to be one of the biggest new bands of the year. They have an amazing future ahead of them. I'm so thrilled — I'm so thankful for them to come onstage and play for you."