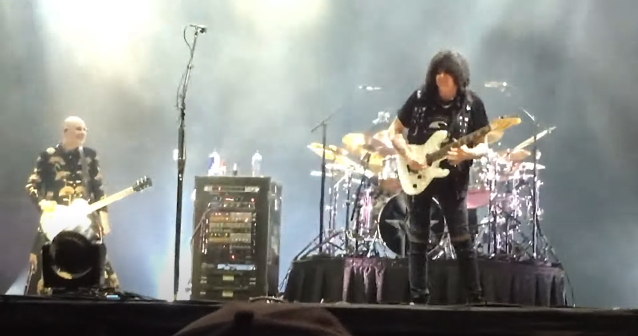 Guitar virtuoso Michael Angelo Batio joined SMASHING PUMPKINS on stage this past Friday (September 17) at Riot Fest in Chicago to perform the set-closing song "United States". Fan-filmed video footage of his appearance can be seen below.

Michael Angelo Batio is known for his technical mastery of the fretboard and his extremely fast picking and sweep picked arpeggios. He has been praised for his showmanship during performances, particularly his use of the "Over-Under" technique, and for his ability to play a double and quad guitar, using both hands to play.

Michael Angelo Batio showcased his guitar techniques and innovations for the first time with his early instructional programs, as well as in his live performances, which are now considered "standard techniques" among guitarists worldwide. Michael not only invented but was the world's first player of the double-guitar and was also voted one of the "World's Top 100 Guitarists Of All Time" by Guitar World magazine. He also holds the YouTube record (over 22 million views) for his instructional video "Speed Kills" which teaches shred guitar techniques and how to "master the art of playing lightning fast."