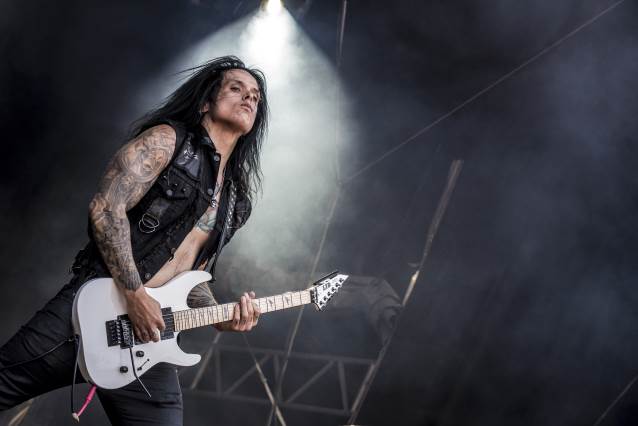 Bill Hudson says that he left Udo Dirkschneider's DIRKSCHNEIDER of his own accord and wasn't pushed out of the band, despite the singer's suggestion to the contrary.

The former ACCEPT frontman recently gave an interview to United Rock Nations in which he stated about Bill's departure: "We had a problem with a session guitar player for the second time. Bill Hudson was not the right guy for us. He was not a team player. He was not interested in songwriting and recording the [new U.D.O.] album. It was a little bit strange situation. And then, after the American tour, we said, 'Okay. Sorry, guy, but this doesn't work with us.'"

Earlier today, Hudson, who has previously played with TRANS-SIBERIAN ORCHESTRA, CIRCLE II CIRCLE and JON OLIVA'S PAIN, released a statement to BLABBERMOUTH.NET in which he disputed Udo's account of the guitarist's exit from DIRKSCHNEIDER, explaining that he "resigned" from the group once he arrived at the conclusion "that the project/band was not a good fit" for him.

Hudson said: "I was very surprised to become aware of a comment Udo Dirkschneider was quoted as saying about me and his project, DIRKSCHNEIDER.

"Every part of [Udo's above-mentioned quote] is not only false but also, not an accurate representation of why I am no longer a part of DIRKSCHNEIDER.

"I resigned from DIRKSCHNEIDER prior to the start of their American tour. I did, though, remain with the band for that tour as a favor to the band's manager, who asked me to stay on for the tour. Furthermore, upon the completion of their American tour, I was asked to perform with the band in Europe a month after the American tour was completed on the 'Full Metal Cruise'. These actions validate that Udo Dirkschneider's quoted comments surrounding my departure from the project/band are false. No one at any time, including Udo Dirkschneider, ever said to me, 'Sorry, guy, but this doesn't work with us.' I resigned from the project/band, stayed on for the American tour and the cruise as requested by management, and then fully departed.

Dirkschneider has spent the last two years touring under the DIRKSCHNEIDER banner, performing classic ACCEPT songs for the last time. The trek, which was originally supposed to conclude with the band's North American run in January/February 2017, has now been extended through the fall of 2018.