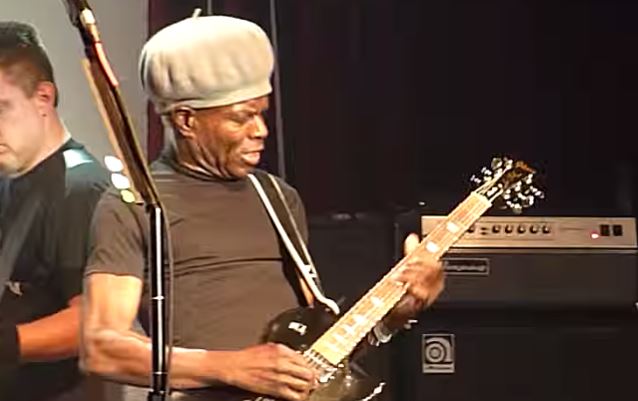 Guitarist LLOYD GRANT: How I Ended Up Playing On Original Recording Of METALLICA's 'Hit The Lights'

Lloyd Grant, the guitarist who played on the original recording of the METALLICA song "Hit The Lights" in early 1982, was interviewed on the February 27 edition of the "Rockzone Legends" show. You can now listen to the chat below.

Asked how he first got involved with METALLICA, Grant said: "There's a lot of different versions of what happened. My version is, me and Lars [Ulrich, METALLICA drummer] were jamming down there in Orange County, California, and we jammed with a few people, and we were looking for other people to jam with. And we met through… they had a weekly newspaper down here called the Recycler, and we met through that. And that's how it started."

He continued: "We were playing for a long time, and he came down to my place, my apartment, once, and he kept asking me to come by and jam with the band, but I was really busy doing other stuff. And I went down and played with them… me and him and James [Hetfield, METALLICA guitarist/vocalist]; just the three of us. James was playing bass and I was playing guitar and Lars was playing drums. And we rehearsed that 'Hit The Lights' song. But way before that, Lars let me hear that song. We were hanging out watching soccer, and he says, 'Hey, I met this guy,' blah blah blah, 'and he's exactly what we wanna jam with.' And he played this one song, and it was great, and that's how I first was introduced to 'Hit The Lights'. And after that, I went over and jammed a few times. Then he called me and said they were gonna be on this compilation album ['Metal Massacre'] and he brought over a tape of 'Hit The Lights' recorded on a four-track and asked me to make some solos for that, and they were gonna bring the four-track down and they were just gonna put it out an dump it on the compilation album."

Grant also talked about what it was like joining METALLICA on stage at the Fillmore in San Francisco as part of the week-long celebration of the band's 30th anniversary in December 2011.

"Yeah, it was one of the greatest experiences of my lifetime, man," he said. "I went up there, and all these rock stars are showing up — Ozzy [Osbourne], Geezer Butler… Everyone was totally well known and rock stars on the same stage that I was gonna play on that night, so that was a pretty wonderful experience. And those guys worked really hard on that stuff. I mean, they'd get there in the morning and they'd play all the songs they were gonna play in the set and they'd go over them several times. They'd start rehearsing in the morning, and they'd stop just before the show start[ed], so they worked really hard. So more power to them. They worked pretty hard. And not only that And not only that — they were really hospitable, and it was a great experience, to be honest. A really good experience."

In his "Metallica Unbound" book, noted hard rock journalist K.J. Doughton wrote about Grant's brief time with METALLICA, "Lars and James decided, with only hours to go before the 'Hit The Lights' demo was due for submission [to be included on Metal Blade Records' 'Metal Massacre' compilation], that a second lead by a second guitarist would be essential! Lars knew a Jamaican guitarist named Lloyd Grant who was available. So, on the way to Hollywood's Bijou Studio where Brian Slagel [Metal Blade Records head honcho] was already finished mixing the other 'Metal Massacre' tracks, the band screeched into Grant's driveway, lugged the four-track into his front room, and watched him churn a second lead break. The 'Hit the Lights' recipe was now complete."

"I remember we had this four-track recorder," explained Hetfield, recalling the last-minute struggle. "It had tracks for drums, bass, guitar and vocals. Because there were no vocals in certain parts of the song, we could punch a lead in on the vocal track. I remember we wanted to get another solo on, so we stopped by Lloyd's house and hooked up some little fuckin' amp and just ripped through a solo. It was the first take. We went into the studio and that solo ended up on the record. It's a fuckin' great solo, man!"

Although many stories claim Grant was actually a member of METALLICA, James maintains that this single, slapdash encounter was the only time he was involved with the band. Other associates remember that Grant was a talented Delta blues player who had a knack for tasty leads. "He could play leads like a motherfucker," said James, "but his rhythm stuff was not very tight."

The second and third pressings of "Hit The Lights" for "Metal Massacre" included Dave Mustaine and not Grant.