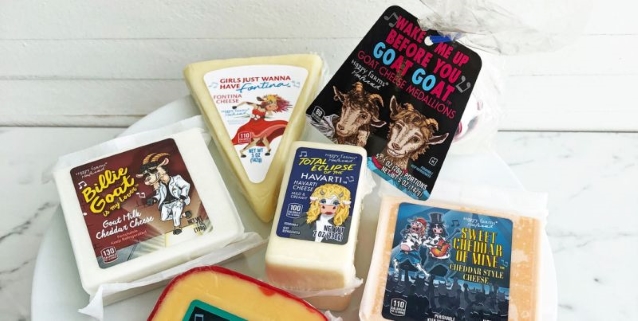 Aldi, the German-based discounter best known for its low prices and no-frills approach, is offering a new line of limited-edition cheeses with names that are parodies of popular song titles from the 1980s, including classic tracks by DEF LEPPARD and GUNS N' ROSES.

According to Delish, Aldi will make six new Happy Farms cheeses available on February 6, among them "Sweet Cheddar Of Mine" and "Pour Some Gouda On Me". Timed for the Grammy Awards (which happen on Sunday),the other cheeses, which are all priced at $3.49, are named after songs by Cyndi Lauper ("Girls Just Wanna Have Fontina"),Michael Jackson ("Billie Goat Is My Lover"), Bonnie Tyler ("Total Eclipse Of The Havarti") and Wham! ("Wake Me Up Before You Goat-Goat"). The cheeses come in either 5 oz. (Lauper and Wham!) or 7 oz. (all others) packages.

These cheeses are Aldi Finds (Special Buys),so stores will have a limited supply, and once they're gone, they're gone.

With its roots as a family-owned store in Germany, Aldi reportedly now has more than 1,800 locations in the U.S. and plans to spend billions to remodel and build new stores to hit the 2,500-store mark in two years.