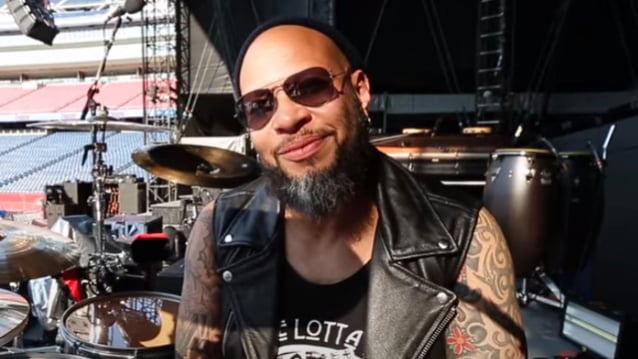 During an appearance on the latest episode of the "Appetite For Distortion" podcast, GUNS N' ROSES drummer Frank Ferrer was asked to name "the most challenging song to play" in the band's live set. He responded (hear audio below): "That's a really good question, because there's three eras in GUNS — there's the 'Appetite [For Destruction]' [era] with Steven [Adler], there's the '[Use Your] Illusion' [period] with Matt [Sorum], and then there's the Brain [Bryan Mantia]- Josh Freese 'Chinese Democracy' [era]. And all three eras are really unique. The 'Appetite' songs don't sound like the 'Illusion' songs — they don't have the same feel. So, the toughest part… I mean, in a weird way, it's almost kind of like all of 'em, especially from the Sorum-Adler era. And what I try to do as a groove drummer is try to sit somewhere in between both drummers, so you still have a punk rocky, off-the-rails kind of feel, but then a nice, solid, dependable foundation, like Sorum gives you. So, it's kind of challenging. Now, the 'Chinese Democracy' stuff is more straight ahead. The challenges I have with that is playing it more like Brain played them, even though I was able to add some stuff myself later on, once I joined the band."

He continued: "The toughest part is finding the right groove in between those two eras — the first two eras — I think. And I think especially with Slash [guitar] and Duff [McKagan, bass] in the band now, because it was their era — they wrote that stuff; it's their music — I'm able to find a nice spot where those guys are really comfortable playing the songs, but I'm also comfortable playing from my heart without being cerebral and having to think too much about the parts. So, I would say somewhere in between those two drummers."

Ferrer joined GUNS N' ROSES in 2006 as a temporary fill-in for Mantia. Before he knew it, Ferrer was a permanent member of GN'R, contributing to five songs on the "Chinese Democracy" album.

When not touring with GN'R, Ferrer plays with a couple of side projects, THE COMPULSIONS and his personal band PISSER.

Earlier in the month, GUNS N' ROSES canceled its previously announced spring/summer 2020 European tour due to the COVID-19 pandemic which is sweeping the globe. The trek was scheduled to kick off on May 20 in Lisbon, Portugal and hit approximately a dozen European cities before concluding on June 27 in Dublin, Ireland.

The band is now reportedly working on a new studio album — the first under the GUNS banner since "Chinese Democracy" and the first to feature singer Axl Rose, Slash and McKagan since 1993.