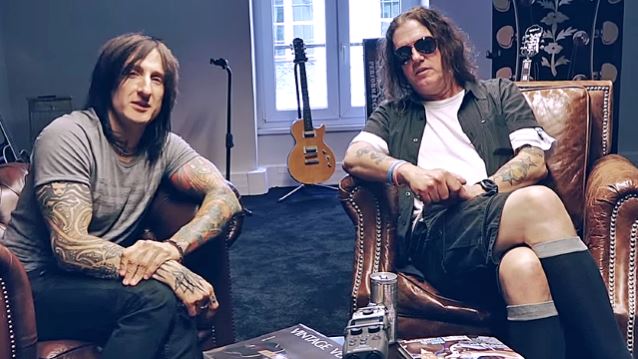 GUNS N' ROSES Keyboardist DIZZY REED: Only AXL ROSE Knows When Next Album Will Come Out

In a brand new interview with VerdamMnis E-Magazine, GUNS N' ROSES guitarist Richard Fortus and keyboardist Dizzy Reed were asked if they will be involved in the songwriting process for the band's long-awaited follow-up to 2008's "Chinese Democracy".

"[We are] definitely going to be involved," Richard responded. "There's so much stuff that was done [already]. I mean, there's two or three albums' worth of material [that has been recorded — seriously!"

He continued: "We've all been handing files back and forth to one another. We look forward to getting at it seriously and releasing a new album as soon as possible."

Added Reed: "It's good stuff. That will come out awesome. When will it come out? We just don't know yet. Only Axl [Rose, GUNS N' ROSES singer] knows, and he's very secretive. Be patient."

Fortus and Reed are also playing together in THE DEAD DAISIES, a powerful musical collective created by a rotating lineup that also features John Corabi (MÖTLEY CRÜE, RATT) on vocals and Marco Mendoza (THIN LIZZY, WHITESNAKE) on bass.

Fortus said in a recent interview with Austrian fanzine Stormbringer that GUNS N' ROSES is going to release new music and tour behind it in 2016. Fortus revealed, "We're gonna be doing stuff next year… We're not gonna have anything out this year. Next year, it should be out. And we'll be touring."

The last GUNS N' ROSES album, "Chinese Democracy", came out in 2008 and ended a 17-year absence of new material.

Rose, guitarist D.J. Ashba and other members of the current lineup have hinted that more material recorded during the "Chinese Democracy" sessions has yet to surface.

Reed mentioned the existence of unreleased music a while back. "We recorded a lot of material back, you know, when we started working on 'Chinese Democracy', so there's a quite a bit of unreleased stuff, I think, that would be really cool to be finished and put out," he told The Pulse Of Radio. "Eventually something's got to give, you know, and it's gonna come out."

"Chinese Democracy", which featured an all-new lineup of the band built around Rose — the sole original member — sold less than 750,000 copies upon release despite the long hiatus between albums and its near-mythical status.

Every original member of the band left during the 13-year recording sessions, along with several replacements and at least three producers.

The present lineup of the band has toured intermittently since 2006 and played its second Las Vegas residency last year.