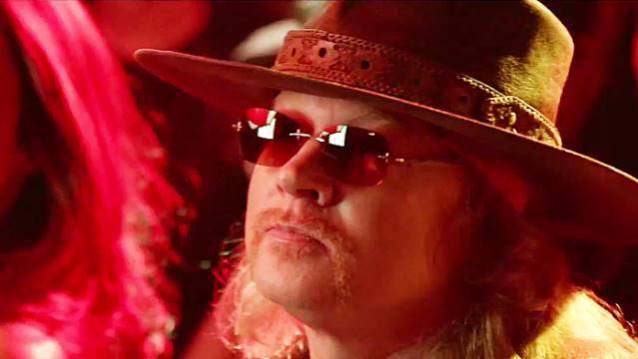 GUNS N' ROSES frontman Axl Rose makes a cameo in a new Budweiser World Cup commercial, which can be seen below. Seconds into the two-and-a-half-minute video, you see a familiar-looking bodyguard, who is in fact Brazil's beloved UFC legend Anderson Silva. Shortly after, a band comprised of Gary Cahill, Samuel Eto'o and Hulk — professional footballers who will be participating in the World Cup — takes to the stage and performs a "rap" version of the GN'R classic "Paradise City". As the track comes to an end, Hulk lobs a guitar pick into the crowd. Surrounded by a few models, Rose catches the pick and uses it to open his Budweiser. In recognition of the footballers' performance, Axl raises his Budweiser in toast.

Another GUNS N' ROSES classic, "Sweet Child O' Mine", was featured in an advertising campaign last year by health-products giant Johnson & Johnson. A soft, baby-friendly version of the song was the musical backdrop to the company's first corporate branding campaign in more than 10 years.