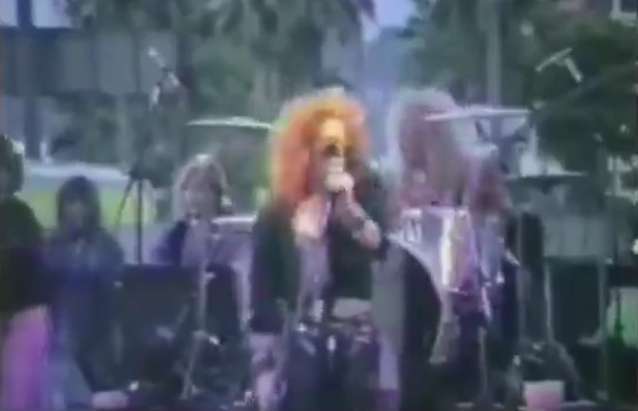 Marc Canter, who grew up best friends with GUNS N' ROSES members Slash and Axl Rose, will launch a video podcast called "The First 50 Gigs: Guns N' Roses And The Making Of Appetite For Destruction" on Patreon on August 19 at 12 a.m. EST. To coincide with the podcast launch, a week-long "First 50 Gigs" gallery exhibit will open at the Rosevelt Hotel in Los Angeles, hosted and created by Lethal Amounts.

"The First 50 Gigs" had two goals in mind: to recapture one of the greatest origin stories in L.A. rock history — the emergence and breakthrough of GUNS N' ROSES and their debut album — and give the fans, access to Canter's one-of-a-kind archive.

The podcast creators said: "We have enough content to keep you entertained until the end of 2021. Season One will take you from the earliest moments when Slash first picked up a guitar in high school in 1981, to the newly formed 'Appetite' line up of GN'R when they first return from 'Hell Tour' in June of 1985.

"We chose Patreon as the distribution platform for this series as we need support from fans of this project to tell the entire story over five seasons. We've bootstrapped Season 1, but we can only produce Season 2 when we hit our first goal of 5,000 subscribers. At 10,000 subscribers, we'll produce the entire series, so we need your help to get there and bring this entire story to life.

"We have three Patreon subscribers tiers with different benefits. They are:

"General Admission (GA) gives you access to audio only episodes of 'The First 50 Gigs' twice a month on Patreon. This includes show transcripts in English, Spanish and Portuguese. GA is $5 a month.

"Reserved Seating (RS) gives you access to all 'The First 50 Gigs' visual content, including episode videos with Spanish and Portuguese subtitles, episode show posts with additional photo galleries, videos and audio clips. You'll also get two bonus episodes a month that can include interviews, audio clips and behind-the-scenes with the show creators. RS is $15 a month.

"Front Row (FR) gets you everything in the previous tiers, plus you'll receive one piece of merchandise once every three months valued at $25 or more. This includes autographed books, prints, t-shirts and other collectables from 'The First 50 Gigs' podcast, Canter's Deli and 'Reckless Road'. Additionally, you'll join us once a month for a 60-90 minute call with Marc Canter and Jason Porath to ask them anything about the show, go even deeper into GN'R origin story and get advanced notice on upcoming content and merch. Special guests from the show may also join for these live sessions. FR is $25 a month.

"The Reserved Seating and Front Row Tiers include private RSS feeds that will allow you stream the show on your favorite podcast player (e.g. Apple Podcast, Stitcher, etc.)".

The first four episodes for Season One are as follows:

Series Introduction: Hosts Marc and Jason introduce you to the series and discuss Marc's role.

Episode 2: Author Laurie Jacobson takes us back with a history of the Sunset Strip from 1900 to 1965

Episode 3: Author Domenic Priore continues the history of the Sunset Strip from 1965 to 1990

Reserved Seating and Front Row subscribers will get 14 bonus episodes that include cutting-room floor interviews, behind-the-scenes footage from "The First 50 Gigs" and "Reckless Road" and more.

To celebrate our launch announcement, we just emailed our latest newsletter with access to a sneak peek of our first episode. Sign up now (link below) if you want to see it, but hurry, it’s only live for 24 hours!https://t.co/HmoVh5Yrhypic.twitter.com/r2Pc40EtJt