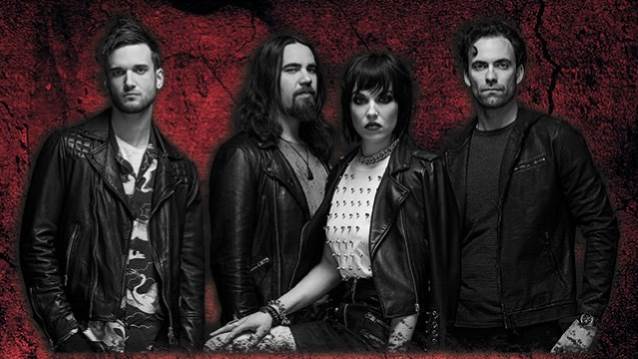 HALESTORM vocalist Lzzy Hale and guitarist Joe Hottinger were recently interviewed by Backstage Axxess. The full conversation can be streamed below. A few excerpts follow (as transcribed by BLABBERMOUTH.NET).

On making their new album, "Vicious":

Joe: "The process was organic, for sure. Nick Raskulinecz, our producer, kind of just sat us in a room and said, 'All right, the four of you plug in your stuff. Who's got a riff?' That's where it began, and we just started writing music. He kind of became our fifth band member. We were just jamming, and he'd pop in every once in a while — 'That was cool! Do that again!' 'All right, Captain. You got it!' We were just chasing what excited us. That was the goal."

Lzzy: "I don't think we realized how heavy of a record we made until we started playing the new songs live. I remember the first show we added 'Black Vultures', and I turned to the guys and I'm like, 'I think we wrote a heavy record, guys.' Like Joe said, we were just chasing whatever got us excited. It's really interesting to now look at the record in its entirety after it's all done and be like, 'All right, I guess we had to get that out.'"

On whether the album's title track was inspired by Hale's experiences in the male-dominated music industry:

Lzzy: "It certainly could be. I write everything from a personal point of view. It's only until after it's been in the hands of everybody else that it becomes this kind of broader message. For me personally, I wrote this particular song at the eleventh hour of this record being done. We kind of had everything finished, and then Joe and I went out to L.A. to settle in and write for fun. I remember the two of us being up at like, 4 in the morning just writing gibberish with this idea, because we loved the word 'vicious.' In my mind, that's when the album came together for me. With this record, it's just a journey message-wise that I had been touching on. What I realized is that it's so much more. Whether you're talking about being a woman in the industry, whether you're talking about being a woman in general, whether you're talking about being a human being struggling with their place in the world and all the different phases that go along with that, it's just so much more in life right now than being strong and weathering the storm. You kind of have to come at life with a little bit of teeth and be fierce about it — be bold and forceful and force yourself into these situations that maybe make you uncomfortable, maybe make other people uncomfortable. Ultimately, you have to kind of be vicious about it. That was, for me, taking that word 'vicious' and spinning it with that positivity. It's about survival, and not just being strong. I remember Joe and I texting the other guys, 'I think we have to call the album 'Vicious',' because up until that point, we had a bunch of other ideas that weren't really clicking."

On the album's "most difficult" song:

Joe: "The most difficult was 'Conflicted', because it was just a tough song. It was a bear."

Lzzy: "'Conflicted' is the only song on the album that came from an outside source. We were showing some songs to our A&R guy, and went up to visit him in New York. He's like, 'I have this idea from these three kids, and it's called 'Conflicted', and they kind of have a half-chorus and kind of a half-verse, but they haven't really finished the song yet. Would you like to finish it?' We'll try anything, so we ended up writing this song and re-writing it about nine times. Our first version of it ended up being this hard rock, balls-to-the-wall... it didn't really work with lyrically how I was kind of wrapping up the song. Didn't we end up doing the final version right before we mastered the record?"

Lzzy: "We got to the point at the end — 'Should we even put it on the record? This is silly.' But we ended up doing it anyway, and what it is what it is, but that was the most difficult nut to crack, because it didn't start out with the nucleus of us, so it was kind of hard to figure out how to make it work on the record."

On the "most enjoyable" new song they wrote:

Lzzy: "'Do Not Disturb' was a fun one. I love that slow groove. I feel bad — I made our producer slightly uncomfortable with the lyrics, poor guy. He's like, 'All right, I think we've got it. We don't have to do it ever again now.' That was a lot of fun to do."

Joe: "I had fun with 'Killing Ourselves To Live'. Lzzy and I had that chorus for a few years. We kind of thought it was always a ballad, and I remember you were always trying to write on piano our acoustic. I was bored fast — like, 'Man, I know it's a good chorus, but what do you do with it?' I remember getting all annoyed one night about the song and I was like, 'Fuck it — let's just make it a rock song,' and kind of sang out a few riffs into my phone. I think we were on tour last October, and I had my little demo rig out with me, and I took the riffs I sang into my phone and made them guitar parts. That was a lot of fun. It was nice to hear that chorus turn into something totally unexpected from my perspective."

"Vicious" was released on July 27 via Atlantic.