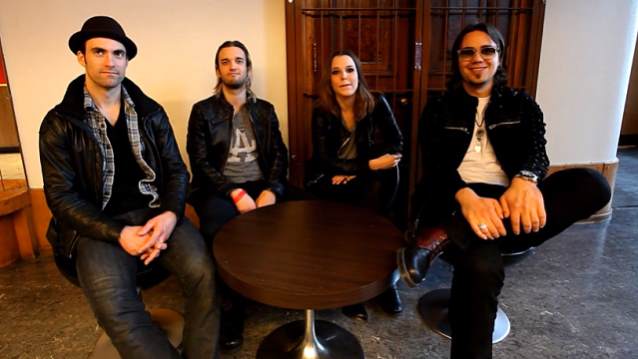 Rocksverige.se recently conducted an interview with the four members of HALESTORM. You can now watch the chat below.

As previously reported, HALESTORM has debuted two new songs at two separate shows recently. The first tune, "Heartbreaker", was performed on March 28 at the Cannery Ballroom in Nashville, Tennessee, while the second track, "Mayhem", made its debut earlier this month in England.

Asked if "Mayhem" is a good indicator of what HALESTORM fans can expect to hear on the band's next album, singer Lzzy Hale said: "Definitely. Especially since that one was the one that we felt like it needed a little bit of work, and we weren't really considering it one of our best songs. So we wanted to see how we could develop it on tour, and I think that the crowd has really gotten us excited about it now. So it might actually have a shot at being on the record."

Added drummer Arejay Hale: "It definitely will help the writing process for the rest of the songs. Now we have an idea of, kind of, how the crowd reacts to certain things. So it kind ofgives you a good guideline, I guess."

Lzzy Hale told The Pulse Of Radio one thing the band might do differently this time. "We're probably gonna record it in Nashville instead of L.A. this time," she said. "It's a quieter vibe and a little less distractions. I think we can kind of lock ourselves into a studio [laughs] and become intimate with our inner crazy [laughs] and hopefully not kill each other in the process. [laughs]"